This "floating" art and literary museum by American studio OLI Architecture is housed in a grouping of textured concrete blocks, which are elevated over a lake in China's Zhejiang Province (+ slideshow).

The New York firm designed the Mu Xin Art Museum for Yuanbao lake in Wuzhen – a town at one end of China's Grand Canal, which is dubbed the Venice of the East for its network of off-shoot canals, lakes and waterfront houses.

The museum contains eight galleries, five of which are dedicated to the abstract art and writing of the museum's namesake, Mu Xin, who was born in Wuzhen but later immigrated to America.

Two storeys of the cast in-situ concrete structure sit above the surface of the lake, while a third level featuring a water garden is submerged below – making the building appear to float. David Chipperfield Architects used the same technique to support a "village" of grey stone houses in nearby marshland.

"At the beginning of this project, we thought carefully about the location and siting of the museum," said studio founders Hiroshi Okamoto and Bing Lin. "In Wuzhen, one experiences a dense landscape of centuries old canals, streets, markets, courtyards, bridges and verandas." 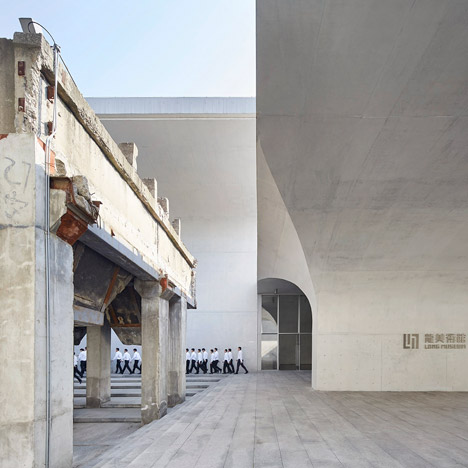 "Taking a cue from the urban fabric of this 1,000-year-old ancient water town, the museum itself is a landscape of intersecting experiences," they added.

The museum's concrete walls are covered in linear indentations, both inside and out. A tiled footbridge connects the building's triple-storey entrance hall to the land.

The volumes at the rear contain the galleries. Some intersect, while others are connected by "streets" which lead to rock gardens or steps that lead down to the surface of the lake – a popular boating area.

"Our design of this museum is inspired by the complexity of the artist's work, as well as his writing, which was shaped by his lifelong existence between cultures, both in his native and adoptive countries," said Okamoto and Lin.

"The reflection of Mu Xin's work is illustrated through the design of the building as seen in the series of interconnected floating rooms and the concrete exterior, which evokes gentle watercolour brush strokes."

Galleries are lit by skylights and large windows, which are covered by slatted screens that cast stripy shadows across the inner walls.

Slender strip lights on the ceiling echo the texture of the concrete wall surfaces. Other elements were created using Mongolian black granite and walnut wood.

Mu Xin's manuscripts are presented on black plinths and in glass vitrines within the galleries.

Other facilities include a bookshop and library, cafe, offices, auditorium, collection storage and temporary exhibition spaces.

A growing number of galleries and museums by big-name architects are popping up along China's eastern coast. Among them is a tile-covered folk-art museum in Hangzhou by Kengo Kuma, Jean Nouvel's National Museum of China in Beijing and a cultural centre with a looping bridge in Qingdao by Steven Holl.