The rooflines of this house and coffee shop in Chiang Mai, Thailand, are slanted at different angles to ensure all rooms offer clear views of a canal in front (+ slideshow).

Bangkok-based studio Ekar Architects designed the house, named Baan Rim Kao, for a couple with one child. It is built on vacant land next to the Mae-Kao canal in Chiang Mai, northern Thailand.

One of the owners runs a cafe in the city, and the other is a piano teacher, so the architects were also asked to create a dedicated room inside the house for music classes, as well as a small building to house a new cafe.

"They are a young couple that previously lived in one of their parents' homes, so now they are starting a new life," architect Ekaphap Duangkaew told Dezeen.

The two-storey home has an L-shaped plan, and the single-storey timber-clad cafe is placed in front of it to provide a degree of separation between the house and the street.

Both buildings feature roofs that taper in different directions to maximise views of the canal.

The home's roof slants down to guide the views towards the water, while the cafe's roof slants in the opposite direction to avoid blocking views from the home's upper level.

"Having a view of the canal is rare, so the key challenge of this design was to make sure every room took in this view," said Duangkaew. "To do this, I had to place the highest side of the L-shaped house furthest from the water to allow for views over the lower levels." 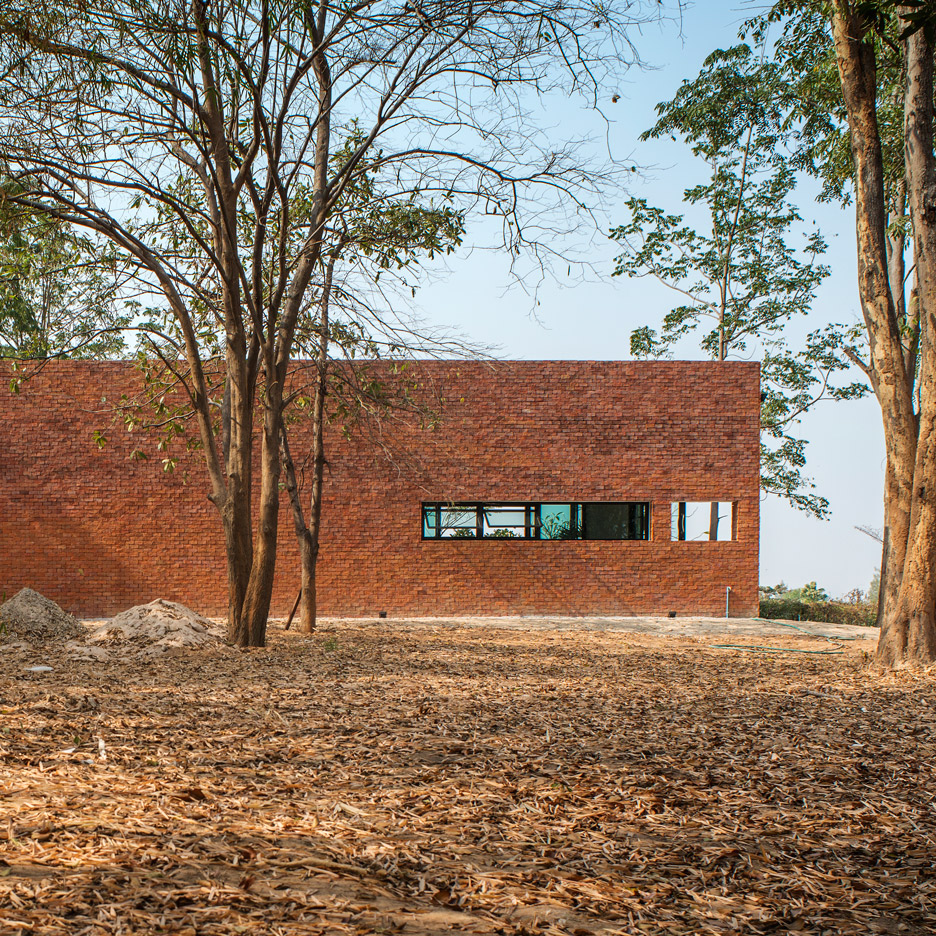 Layers of brick, concrete and glass define private spaces in a Thai home

The garden is conceived as an additional 'room' and placed in the centre of the site to provide a more informal route from the driveway to the living areas, through large glass sliding doors.

"Inspired by the surrounding trees and water, I believed there should be a unique way to reach the house," said Duangkaew.

"As such, a typical front door to the living areas was replaced by a garden room that leads the owners to various spaces in the house."

The ground floor of the house has an open-plan kitchen and dining room, plus a double-height living space that is 6.2 metres tall.

"The idea was to make the indoor space feel more like an outdoor space, to bring a sense of the canal, the garden and the height of the trees into the house," said Duangkaew.

The ground floor also contains the piano room and a guest bedroom, while the first floor has two more bedrooms, and two bathrooms.

White ceramic tiles were used for flooring inside the house, chosen for their affordability, and teak plywood was used for the kitchen cabinets and the stair balustrade to provide a subtle visual connection with the surrounding trees.

The cafe has a deck built around one of the site's existing trees, and has been covered in a local hardwood from the pao tree.

The house was built with a double layer of bricks covered in a white plaster render, and completed in 12 months.

"Our focus for this house was on the context, rather than the form or the use of outstanding materials, so we kept the construction simple and economical," said Duangkaew.

"Before I designed this house, the owners didn't like the idea of living on a canal, but now they say it has changed their life, and their son is always in the garden," he added. "Both of these things are small successes for me. The house has allowed them to live better, with an understanding of nature."

Other recently completed Thai houses include a home that uses brick walls to turn its back on a nearby resort and a Bangkok house with an exposed steel frame.

Photography is by Damrong Lee.