A house wrapped in wooden shutters on the outskirts of Bangkok by IDIN Architects has space for a couple to coexist while pursuing their separate activities.

Called JB House, it was designed for a couple who wanted distinct yet connected spaces that would allow them to focus on their hobbies of photography, baking, writing and drawing.

With only a small site to work with, IDIN Architects divided the home vertically.

The writing room's desk and the kitchen island have been aligned vertically, with the glass desk covering a void that looks directly down to the kitchen below.

"A huge piece of glass is used for the top of the woman's working table, which creates a visual connection to the kitchen island below, allowing them to see each other while doing their own activities," explained IDIN Architects.

The upper floor steps upwards on one side, and glazed strips have been inserted beneath these steps to allow further glimpses between the floors, allowing the owners to "privately keep in touch."

To provide privacy, the master bedroom occupies the highest point of this upper floor.

The guest bedroom is at the lowest point, but when desired the whole floor can be transformed into a single large space using full-height sliding doors at either end. 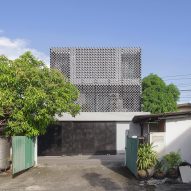 The shutters that surround this upper level also contribute to this play of open and closed.

Built as a double skin, the wooden shutters sit alongside glazed screens that can remain closed to allow light in or be opened to allow the home to be naturally ventilated.

When open, these shutters double as vertical brise soleil that prevent overheating at certain points during the day.

When these shutters are closed, skylights along the staircase provide natural light for this upper level.

The staircase is also been lined with large timber bookshelves, intended to be filled over time.

Similarly, storage areas in the living and kitchen spaces have also been built into large cupboards that can be concealed by folding wooden doors.

Two layers of large curtains allow light and views through the glazed envelope to also be controlled.

Many architects and designers incorporate shutters into the envelopes of buildings to prevent overlooking and control light levels.

In London, MATA Architects used mechanical shutters for an extension to a home, and in Lithuania, Aketuri Architektai designed a lakeside retreat that can be completely closed using a series of large shutters.