Design Miami 2015: Mexican architect Fernando Romero has created a glowing ball of 2,880 crystals accompanied by a soundtrack of noises made by the sun.

Fernando Romero's El Sol installation, commissioned by crystal company Swarovski, contains a sphere of LEDs that change colour in response to a video stream of the sun provided by NASA.

The outer layer is made from 2,880 specially cut pieces of crystal in four different shapes, housed in 3D-printed resin settings that form a ball.

The outside surface is smooth and coated using a technique originally developed by Swarovski for Dior dubbed Aurora Borealis, which changes the colours on the surface of the crystals from green to blue, violet and red. Inside, the crystals are faceted, creating prisms that refract the light from the LEDs.

"We thought we would do something related with light," Romero told Dezeen. "When you design buildings you are working with how the light defines the space." 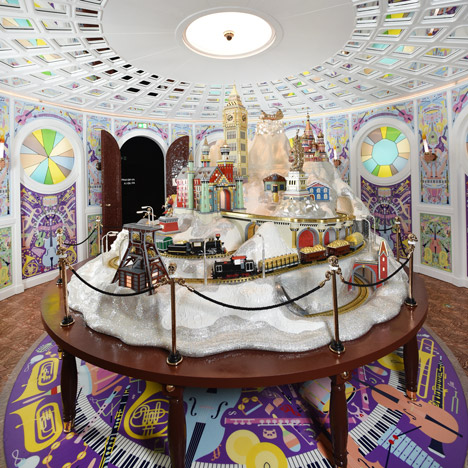 "It's an opportunity to develop a product that connects the important of light in architecture with the importance of light in the way in which you value the beauty of prisms," he said.

One billion times smaller than the real sun, the design of the ball was inspired by geometry used by the Aztecs and Mayans in Mexico for constructing their sacred pyramids. Both cultures had a strong relationship with the stars, planets, and the sun.

"The project has allowed me to explore mathematics in relation to nature and my Mexican ancestry, which is very important and personal to my practice," said Romero.

Romero, who is founder and director of architecture firm FR-EE, was also interested in experimenting with the geometric structural forms pioneered by 20th century engineer Buckminster Fuller.

He has been investigating some of Fuller's structures as part of the huge Mexican airport project his studio is working on with British architect Norman Foster.

"It's the first time in history that civilisation is able to see with images very clearly the real sun," said Romero. "It's the epicentre of our solar system but it also defines our daily life, all forms of living and nature that surround us."

"For us it was interesting to connect it with Buckminster Fuller," he explained. "This platonic idea of doing perfect forms that is what has made possible our airport in Mexico in a certain way, so we created this perfect sphere of 2,880 hexagons."

The installation is accompanied by a soundtrack, which is the "sound" of the sun recorded by a team from the School of Physics and Astronomy at the University of Birmingham.

Based on audio wave data gathered since the 1970s, the noises have been sped up nearly 100,000 times to make them audible to humans, turning 30 years worth of sound data into a loop that lasts one hour and 20 minutes.

El Sol marks Swarovski's 10th year at Design Miami, which runs from 2 to 6 December 2015. The crystal company's previous installations at the event in Florida and its sister fair in Basel have included a series of crystal lamps resembling the human eye, and a piece by London designer Asif Khan that used Swarovski crystals to recreate an ice halo – an atmospheric effect most often seen in freezing northern climates.

"[This is] more of a meditative piece where they tap into the senses, the change of the colour, the sound, the refraction of the crystal, the impact of the shape," Nadja Swarovski told Dezeen.

"We've been working with designers, artists and architects since 2002, and it's been amazing to see what they come up with," said Swarovski, who is the great-great-grandaughter of the company's founder and its global patron of design. "We just provide the cut crystal, they provide the vision of how that crystal can be used in a creative way."

Swarovski celebrated its 120th anniversary this year, and expanded its theme park in Austria with structures by architecture firm Snøhetta. Belgian artists Studio Job created a giant crystal-encrusted model as one of the new attractions at the Swarovski Kristallwelten park in Wattens.

Romero currently has two significant projects under way in Miami – a chapel with plans modelled on the pleated fabric gown of religious figure the Lady of Guadalupe, and the Latin American Art Museum. He is one of a growing number of international architects helping to turn Miami into the "capital of Latin America".