The letter F in our festive countdown of bridges is a small looping structure built by a trio of product design students outside the Academy of Fine Arts in Sarajevo.

Adnan Alagić, Bojan Kanlić and Amila Hrustić were only in the second year of their bachelor studies when they won they competition to design a new Miljacka river crossing in the Bosnia and Herzegovina capital.

Called Festina Lente, which in Latin means "make haste, slowly", the steel bridge spans 38 metres but loops-the-loop in the middle to create a curving shelter. Round wooden seats are located beneath the canopy on both sides. 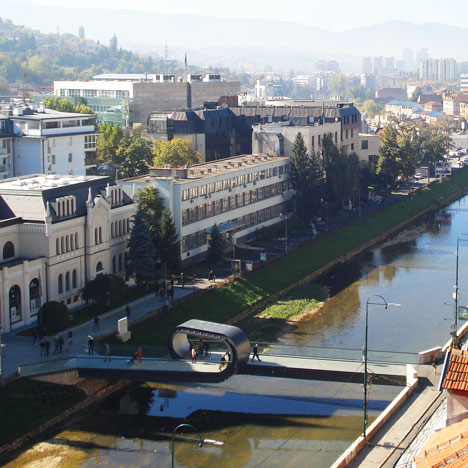 The outside of the bridge is covered with dark aluminium plating, contrasting with the pale grey aluminium that provides the ground surface and giving the bridge a monochrome aesthetic.

"The basic idea of the bridge is the union of the secular and spiritual," explained the designers shortly after the completion in 2012, acknowledging the academy building's former use as a church.

"Its form is unique, simple and attractive at the same time," they added. "It's a place of meeting and interacting."

Festina Lente was completed in 2012. Glass balustrades run along each side of the bridge, so as not to detract from its unusual profile, and LEDS illuminate the form after dark.

In the spirit of an advent calendar, the Dezeen A-Zdvent calendar is counting down the days until Christmas with an A to Z of iconic contemporary bridges. See all the ones revealed so far »