The Clover lighting rests on spindly wooden stems with a cluster of petal-shaped lamps at the top. A bench and pair of stools underneath the street light offer seating to pedestrians, and echo the material and rippled surface of the lamp.

Although the wood used has been designed to appear handcrafted, the pieces were actually digitally machined using "an unprecedented industrial process" that allowed Lehanneur to blend together various types of wood. 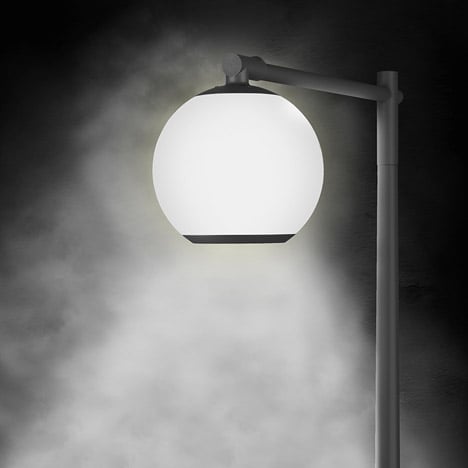 The designer likened the structure to "a replanted tree that always should have been there".

The accompanying Clover bench echoes the tree theme, and is shaped like an oversized twig. According to Lehanneur, it has been designed to be adaptable for different locations by extending up to 15 metres long if required.

The aluminium domed lamps have been positioned to reduce light pollution, and feature LEDs that are directed downwards.

Another oval section that faces towards the sun is covered in solar panels, and can collect enough energy to power the lights for up to three hours. Passersby can also charge their phones via a self-service hatch.

The piece follows a series of Wi-Fi stations he designed for the city, which gave inhabitants a place to sit down to use laptops or access local information.

Lehanneur, who is the head of Chinese technology Huawei's design research centre in Paris, previously created a 20-sided speaker that could rest on any of its faces.

Clover was installed for the United Nations Conference on Climate Change in Paris, which takes place from 30 November to 11 December 2015.