The double-helix structure of a DNA strand inspired the design of the Singapore Helix Bridge by Cox Architecture, the latest addition to our Christmas countdown.

Spanning the Singapore River between the city's central business district and the newly established bayfront area, the 280-metre-long Helix Bridge is a pedestrian bridge with a complex stainless-steel structure and a curving deck.

Its design evolved out of a desire for a more delicate and lightweight alternative to the vehicular bridge that also crosses the water at this point.

According to both Cox Architecture and engineer Arup, it is the world's first example of its kind. They claim its dual-helix structure uses five times less steel than a conventional box-girder bridge. 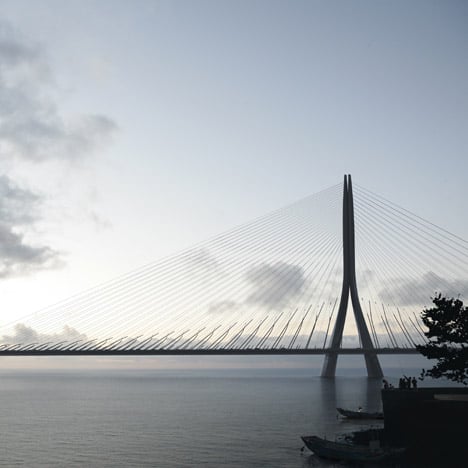 "While the structure is incredibly delicate and intricate, it has been engineered to support more than 10,000 people at a time. The Helix is the first example of this structural solution applied to a bridge – there is nothing else like it."

The curved plan allows the crossing to descend continuously into the bayfront promenades on each side, connecting with attractions including the Moshe Safdie-designed Marina Bay Sands complex to the south and Michael Wilford's Esplanade National Performing Arts Centre to the north.

It also makes it possible for the crossing to meet the centre of the neighbouring vehicular bridge, but to still appear as a separate entity.

Four viewing platforms – described by the architects as pods – cantilever out from the bridge to offer views over the bay.

Ribbons of LED lighting illuminate the structure by night, emphasising the interplay of the two helix tubes. There are also canopies made from fritted glass and perforated steel mesh to offer shade from the tropical sun.