Opinion: from drones to driverless buses, robots are seen as a replacement for workers who do society's "dirty, dangerous and dull" jobs. But robotic infrastructure has much wider implications for how our cities work, says Dan Hill.

The image of a standard-issue bus driving through a standard-issue Chinese city flitted across Twitter. Utterly unremarkable at first glance, a closer look revealed the driver was kicking back, arms outstretched above his head as the bus rolled forward by itself.

The image was of a trial of self-driving buses developed by the Yutong corporation, due to be running in Chinese cities within the next few years. A few days later, the Singaporean government announced a similar programme of autonomous buses, due to be on the city's roads by mid-2016. A self-driving bus will also be trundling around Switzerland next year.

These are welcome moments amidst the ever-increasing noise around autonomous vehicles, shifting the narrative away from different forms of private car and towards the idea of on-demand, shared autonomous fleets as a form of public transport.

Yutong's grainy images also give us a clearer idea of what our brave new robot future will look like, its natural habitat being the humbly mundane, everyday urban infrastructure of buses and bins, fridges and facades, wetlands and window-cleaners.

This is quite different to the previous popular imagination of robotic buses, which tended to feature placeholder characters like Johnny Taxi, the humanoid robot-driver in Total Recall who had an unfortunate altercation with the future Governor of California. In reality, Johnny Taxi was a ferrying red herring: the bus itself is the robot, not the surrogate "driver". Robots are more like infrastructure than actors. Despite Arnie's best efforts.

Sam Jacob has also written about this idea of robot as infrastructure rather than character, suggesting that the logical conclusion of the smart city – of AI, of robotics and autonomous systems, of algorithmic governance — is that "the city itself is a distributed robot", an implication being a subjugation to the corporate forms of governance culture that produce many of the visions around urban tech.

Jacob's article is a necessary corrective to some of the unthinking hype around robotics, and a broadside against the lazier end of smart city theory and practice. It can be imbibed alongside a dose of the leaked video of the "self-parking" Volvo that drove straight through its watching researchers, perhaps on its way to a parking space that the car briefly judged to be of greater import.

Could we explore the possibility that the 'city as distributed robot' has potential as well as pitfalls?

Projects like Superflux's Drone Aviary at the V&A and the architect Chris Green's for the Design Museum also sketch out this unthinking sleepwalk into encoding urbanism into robotics, deploying autonomous drones, whose twitching physicality becomes a tangible expression of network culture.

These are all powerful critiques, to be absorbed, dwelled upon, and then... How about embodied in urban design practice? Could we explore the possibility that the "city as distributed robot" has potential as well as pitfalls? Could it possibly elicit a set of heuristics, a way of foregrounding that potential, whilst actively avoiding the pitfalls in autonomous systems – using critique to more deliberately sculpt the "dark matter" that directs them? And can we use the notion of distributed robotics to elicit a design brief about cities today, as well as tomorrow?

While in reality AI and robotics may impact just as heavily upon so-called "white-collar work" – lawyers, doctors, accountants — as work that is dirty, dangerous and dull for humans to do, the discourse around robotics usually tends to the latter, to replacing manual labour and low-paid work.

Indeed, one can imagine small robots scurrying down storm drains to keep them unlocked during a downpour, bespoke lizard-like forms designed for that single purpose. Or a window-cleaning octo-droid suction-padding its way around the facade of a Cairo skyscraper, polishing the photovoltaic cells at the 72nd floor in 40-degree heat. Or a vaguely intelligent linear substrate diligently melting the snow off apartment block rooftops in Helsinki, eight floors up at a finger-numbing -20 degrees, turning ice into greywater for the toilets in the building below.

Those might be examples of dangerous jobs that are either impossible, or hardly desirable, for humans to do. Yet variations on these jobs, and others, is work that people do, and have done for centuries. If "dirty, dangerous and dull" defines work suitable for robots, what does this say about our attitude to the people that have traditionally done such work? 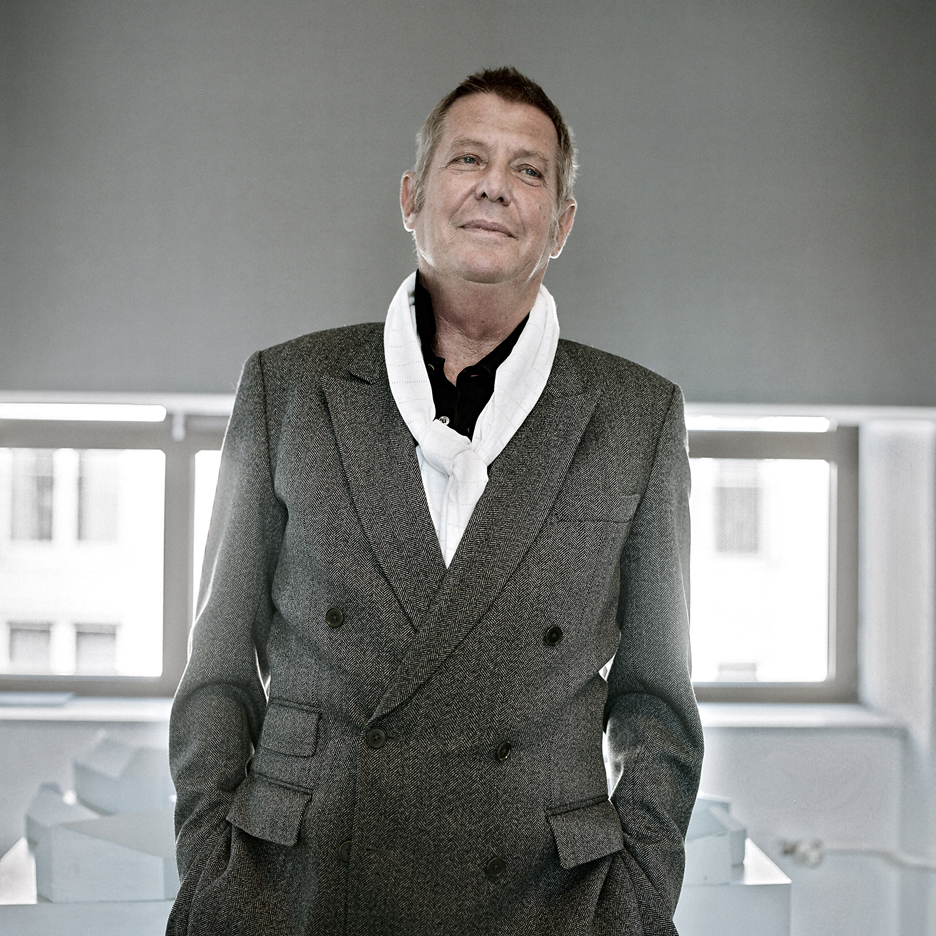 Perhaps the emergence of robotics will force us to confront how we treat the people that currently make our cities tick, largely invisibly and without voice. Given we may have to decide who does what going forward, the current attention on robotics could be repurposed as an opportunity to craft the kind of heuristic I mentioned earlier, sketching out the potential for positive relationships between people, robotics and labour.

We were exploring a particular human-robot relationship that I began to call 'shepherd:sheepdog'

Over the last few years I've been part of a design team, led by Dr Noah Raford of the UAE government, with the Dutch-US firm Tellart as the creative "engine-room", exploring various futures of healthcare, education, municipal services.

In this year's exhibit, Noah's team deployed a mobile street-cleaner robot into a small section of fake streetscape. Sized somewhere between a lawnmower and a decently-proportioned pig, the robot was a kind of oversized urban Roomba, its gleaming white plastic shell possessing a beetle-like demeanour.

Yet importantly, we decided that it should be accompanied by a human worker in pretend municipal overalls, guiding the beetle about its work. The robot was doing something a person would not do, trundling about 24/7, save the odd recharge, as part of the city's infrastructure – not trying to replace human labour, but augment it. We were exploring a particular human-robot relationship that I began to call "shepherd:sheepdog".

I'd previously run a brief for a class at Goldsmith's College, under the tutelage of the inspirational Matt Ward. Some of the students developed this idea of the relationship between people and municipal robotics, with one group imagining that urban robots might have the character of feral animals in the city, like urban foxes or rats, owls or bats.

Perhaps urban robots will also trundle and creep around the same space, with clear motives but their own way of seeing the world, and guided by human municipal workers. The human might be a "shepherd" to the robot's "sheepdog". This relationship, working together to perform tasks, might be based on some form of mutual understanding — a highly limited one, but understanding nonetheless — with the human-shepherd guiding and tending.

This allusion to fauna may not be appropriate, but it's not intended to simply imply a simplistic master-servant relationship. Animals are rarely willing to just be servants; witness any hapless dog-owner in a park, screaming with impotent panic as their dogs run wild. So "shepherd:sheepdog" might be a usefully complicated relationship, but it's a relationship with clear motive nonetheless.

Such a symbiotic relationship is not simply about romantically, or ethically, trying to find a role for people — it could be a key strategy. The best chess "players" are now humans and code working in combination, as partners, each playing to their own strengths. The best engineers use code to optimise structures, yet retain decision-making regarding the preferable outcome, a judgement involving a more complex set of criteria than simply "optimised". The power of Spotify's Discover Weekly feature is the balance of code's raw power and human-curated playlists offering surprise finds. These are all "shepherd:sheepdog" territory.

This would be a rather humbler, quieter mode than tech is usually in

That philosophy – of using tech to do only what tech can do well, whilst letting humans revel in what humans can do well – could provide us with a way forward for thinking about all kinds of urban technology. It's a principle of not trying to do too much.

This is often counter the impulse of technologists, where the innate drive can be to push the boundaries of what technology can do. This would be a rather humbler, quieter mode than tech is usually in. If we see the possibility in the "shepherd:sheepdog" model, then perhaps we might see potential, rather than pitfalls, in the "city as distributed robot".

We shouldn't need the advent of autonomous vehicles to find ways of making streets safe enough for kids to play in, or removing the excesses of 1960s traffic engineering, or radically diminishing the number of vehicles in favour of walking and cycling, or favouring vehicles that are safe, quiet and run on renewables.

We can do all of that without autonomous vehicles. We don't need to explore drones — as Chris Green and Superflux have, as well as Amazon recently — to find a new use for urban rooftops; that "fifth facade" should be highly productive either way, whether they become stabling yards for drones, or simply covered with vegetation, solar panels or rooftop bars.

But if the hype around autonomous vehicles helps to foreground these qualities, and newly address these spaces or tasks, then wonderful. Let's deploy that attention to ask the question of what we want our streets, our buildings, our jobs to be like, and then figure out how to get there, hi-tech or low-tech.

As I wrote in a previous article on self-driving cars, Cedric Price's dictum "if technology is the answer, what is the question?" springs to mind, but this time as a positive heuristic, a way of channelling the motive force behind tech's hype into interesting directions. How can we use the apparent answers, dropped in front of us daily, to reframe the way we think about today's cities, as well as those tomorrow?

Recalling Cedric, the answer "logistics drones" leads to the question "what to do with our urban rooftops?" The answer "autonomous vehicles" suggests the question "what do we want our streets to be like?" The answer "self-driving bus" makes me wonder about "what could public transport be?" And the answer "municipal robotics" could instead offer up a set of broader, deeper questions of inequality, craft, labour, immigration, and what we want, as humans, to do and to be.

Dan Hill is an associate director at Arup in London, where he is head of Arup Digital Studio. He is an adjunct professor at both RMIT University and the University of Technology, Sydney,in Australia, and his blog City of Sound covers the intersection between cities, design, culture and technology.