Custom suites at the 26th Icehotel in the Arctic Circle include a life-sized ice elephant and a recreation of a 1920s cult horror film (+ slideshow).

Located near the town of Jukkasjärvi, in Swedish Lapland, the 55-room Icehotel is built annually from ice and snow sourced from a nearby river.

This year's temporary structure opened on 11 December 2015, and includes 19 uniquely crafted Art Suites as well as a bar and a church.

The suites were all created by different artists, working either individually, in pairs or in groups. They include a room full of flying sheep and a 1970s love capsule. 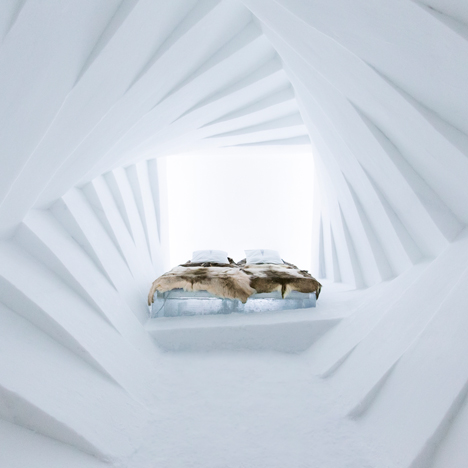 The Cesare's Wake suite references 1920s cult horror film The Cabinet of Dr Caligari, and was designed by Petros Dermatas and Ellie Souti.

A three-metre-tall African elephant towers over the ice-framed bed in the suite by Swedish sculptor Anna Sofia Maag, who also created the unicorn for the hotel's main hall in 2014.

The designers of last year's ice church – Tjåsa Gusfors and David Andrén – based a suite named Show Me What You Got on a peacock.

Annie Hanauer and Matt Chan focussed their design on cairns – piles of rocks used in open space areas to mark hiking trails. Ice slabs are stacked together from floor to ceiling to form towers and arches.

The Power of Love room by Sebastian Scheller and Kristina Möckel features enormous ice pipes and a love barometer, while Spanish father-son duo Rob and Timsam Harding have created a "Mediterranean interpretation of the Arctic".

Gothic-like pillars create an ice cave for The Flying Buttress suite, influenced by the shape of hotel's arched ceiling.

A duo from Germany looked to physics to design a suite of molecules and fractals, creating sharp angular shapes in the room. The pair was part of a trio that created a square vortex room at the 2014 hotel.

The amount of material used to build the Icehotel is enough to make 700 million snowballs, and its frozen chandeliers incorporate over 1000 hand-cut ice crystals.

It takes 48,000 hours of labour to complete each time, but completely melts away in the spring. However, Icehotel recently announced plans to build a permanent hotel alongside its seasonal frozen lodgings.

Previous editions of the Icehotel included furniture sculpted from single blocks of ice, a Frankenstein-themed room and a recreation of Parisian rooftops.

Photography is by Asaf Kliger.