Beijing studio MAD has completed an opera house in the Chinese city of Harbin, featuring an undulating form that wraps two concert halls and a huge public plaza (+ slideshow).

The Harbin Opera House is the first and largest building that MAD has designed as part of Harbin Cultural Island, a major new arts complex among the wetlands of the Songhua River.

The 79,000-square-metre building features a three-petalled plan. One houses a grand theatre with space for up to 1,600 visitors, while the other is a more intimate performance space for an audience of 400.

The building is designed to mirror the sinuous curves of the marsh landscape, with an exterior of smooth white aluminium panels and glass. 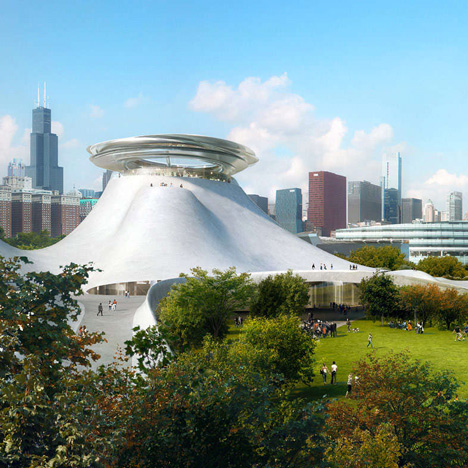 These contrast with the rooftops, where a textured surface of ice-inspired glass pyramids allows light in from above.

According to MAD, the building is designed "in response to the force and spirit of the northern city's untamed wilderness and frigid climate".

"We envision Harbin Opera House as a cultural center of the future – a tremendous performance venue, as well as a dramatic public space that embodies the integration of human, art and the city identity, while synergistically blending with the surrounding nature," said studio founder Ma Yansong.

MAD has designed several cultural buildings, including an artificial island of art caves, an icicle-shaped wood sculpture museum also in Harbin and Chicago's proposed George Lucas Museum. Curved surfaces are a recurring theme through them all, picking up Ma's ambition for a new style of architecture, referencing the landscapes of traditional Chinese paintings.

"We treat architecture as a landscape," he told Dezeen in an interview last year.

The smooth surfaces of the opera house's exterior continue inside, where a large entrance lobby features arched windows and a latticed ceiling that is located beneath the sculptural glass roof.

At one end, a large block of Manchurian Ash wood encloses the grand theatre, with balconies and staircases wrapping around the outside. MAD describes is as "emulating a wooden block that has been gently eroded away".

The second theatre offers more of a connection to the exterior, as its backdrop is a soundproof glass wall. Its walls look more like a pair of weatherbeaten stone cliffs.

The huge public plaza forms the third petal of the plan, and can be used as a venue for outdoor activities and performances.

There is another outdoor performance space at the top of the building – a terrace that also serves as an observation platform.

For job opportunities at MAD Architects, visit their company profile on Dezeen Jobs.

Photography is by Adam Mørk and Hufton + Crow.