The vast shopping centre, which is Europe's largest, opened last month in the Swedish capital. Its developers Unibail-Rodamco tasked the studio with creating a "tactile and sensory" environment that would offer space for cooking stations, where chefs can cook in front of diners. 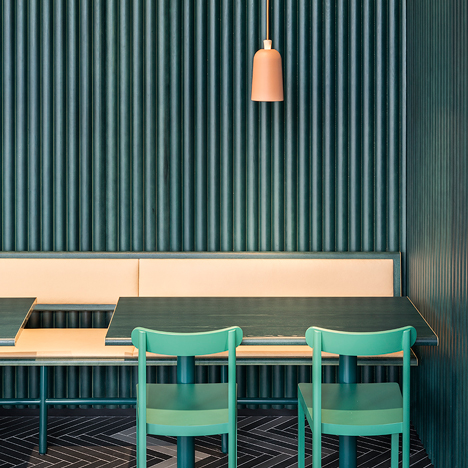 "One way to go is making something with a very strong identity, something you can't miss, something that shouts loud to be seen; a lot of lights and colours to create a strong appearance," said Note. "In the end we decided to pursue a completely different direction."

The area has been designed as an "oasis", with the furniture kept minimal to ensure the chefs focus on the food instead of their surroundings.

Wooden benches and tables rest on metal legs in pastel pink, which is echoed in mushroom-shaped tabletop lamps.

Cooking stations with sinks and ovens have stainless steel and marble coverings, contrasted by dark blue sides. The colours are echoed in tall lamps that feature spotlights hanging from angled branches.

"We took beautiful and durable materials like wood, marble, leather and iron and we tried to recreate the feeling you get when eating something delicious," said the studio, which has also designed soft furnishings, lounge chairs and patchwork marble tables.

"This was the feeling we tried to engrain into the furniture that works collectively to become the Dining Theatre area," they added. 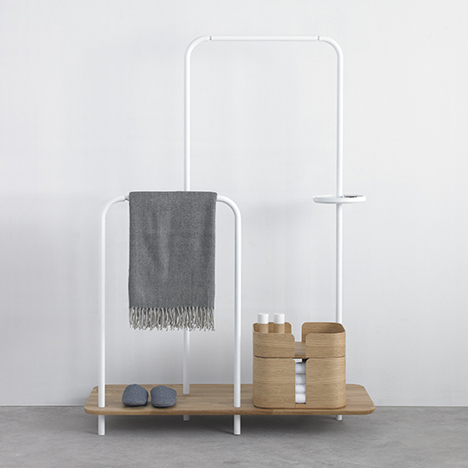 The cooking and eating units can be joined up together, or moved into separate configurations depending on the event being hosted in the space.

"When you're there, sitting on a bench, eating your meal, looking at a Michelin-starred Chef creating a magical meal you can feel the quality, from the food but also from the furniture surrounding you," added the studio.

The concept could also be applied to future malls developed by Unibail-Rodamco.