The synthetic organs combine attributes from both humans and other animals, such as spiders and squid. 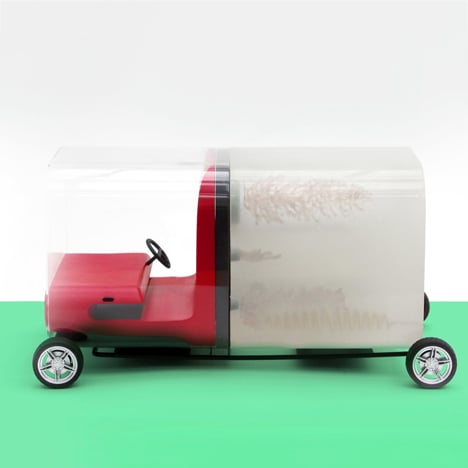     "I'm inspired by the idea that nature designs through evolution," said Ross. "In my design opinion, the integral part of any project is the material."

"Through synthetic biology, it's like discovering a big earth-size warehouse of new materials and their potential uses," he added. "For example if you want to make something waterproof look to the natural world and see how nature designed."

Ross has presented his ideas as a series of models, which were originally designed for a music video and are made from materials including animal hair, latex and ferrofluid.

The Connection organ – designed as an alternative method of communicating information – was based on the shape of a corn cob and was moulded using silicon and resin. When heated, the strands at the end of the organ unfurl to represent non-verbal transmission.

The Trinity organ was created for an alternative human circulatory system, in which different blood types might perform different functions, and was made by setting polyurethane liquid plastic in condoms and sculpting them by hand.

Other organs borrow on biological traits of different animals, such as the Toxic organ. Surrounded by magnetic ferrofluid, it was influenced by the ink dispersed by squid in self defence. The Cobweb organ is designed for a future when humans might incorporate spider genes, and was made by dip-moulding raspberries in silicone.

"There is lots of exciting research going on into the potential to genetically engineer artificial life with cutting edge manufacturing processes and to examine the implications of synthetic life in living products, tools or garments," said the designer.

Ross has also proposed alternative genitalia, including a detachable male hymen and a "third sexual organ", made by latex-casting an avocado, which pulses like a beating heart. 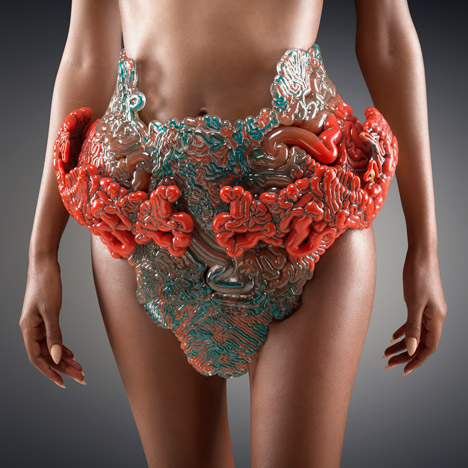 Previously, Royal College of Art graduate Yi-Wen Tseng suggested that synthetic biology could be used to turn animal organs into alternative engines, creating a concept for a car that would be powered by bio-printed cow organs.

In a recent interview with Dezeen, Daisy Ginsberg suggested that advances in genetic technology meant that creating synthetic animals is becoming just another branch of industrial design.