The facade of this private guesthouse in northern Spain extends out to become a fence, enclosing a large tree that was already growing in the garden (+ slideshow).

Spanish office Taller Basico de Arquitectura was tasked with creating the small guesthouse for the garden of a family property in Mutilva, Navarre.

The team named the project House for a Man and a Tree.

"They asked us for a house in the garden, a small house with two rooms: one for the guest and the other for the tree in the small garden," said the architects. "The house will be a place open to the sky and to the garden." 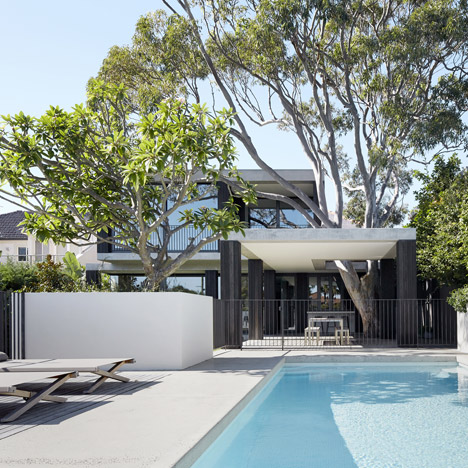 One wall of these guesthouse is glazed, but screened by a series of white-painted metal tubes that function as a sunshade. These tubes extend out to become a perimeter fence surrounding the old tree.

"Metallic tubes painted white, create the visible transparency of both rooms," explained the team, whose previous projects include an angular concrete nursery and a pair of elevated laboratories.

"The first set points the room of the tree to the sky. The second folds to discover from the guest room the garden," they said.

Unlike the transparent facade, the other three walls of the property are rendered grey.

Inside, the space is divided into two by a small toilet room with shelving built into its end. One side functions as a living space or bedroom, while the other accommodates a study.

Natural light is reflected off white-painted walls and carpet. At night, strip lighting running along the ceiling apex illuminates the property.

A glass door leads occupants out the garden.

Taller Básico de Arquitectura is made up of Javier Pérez-Herreras and Javier Quintana de Uña. Other projects by the firm include a university complex in Zaragoza with scale-like walls.