A trio of wavy bridges created by Dutch landscape firm West 8 in Toronto provide the letter W in our Christmas countdown of iconic contemporary bridges.

The family of WaveDeck bridges so far includes the Spadina WaveDeck, the Simcoe WaveDeck and the Rees WaveDeck – all of which feature wooden decks with undulating surfaces. A fourth bridge, named Parliament WaveDeck is also proposed.

All four bridges are named after the street they line up with, and were designed in collaboration with local studio DTAH.

They form part of a wider redevelopment of Toronto's 3.5-kilometre-long Central Waterfront, which runs along the shore of Lake Ontario on the edge of the city's downtown business district.

Spadina WaveDeck, completed in 2008, integrates a series of gentle curves planned in response to the contours of the lakeside landscape. The surface breaks down into stepped layers that form ledges and seats.

The Simcoe Wavedeck was completed the same year, and features a much more unusual design. Its form rises and falls in exaggerated waves that rise 2.6 metres above the surface of the lake. 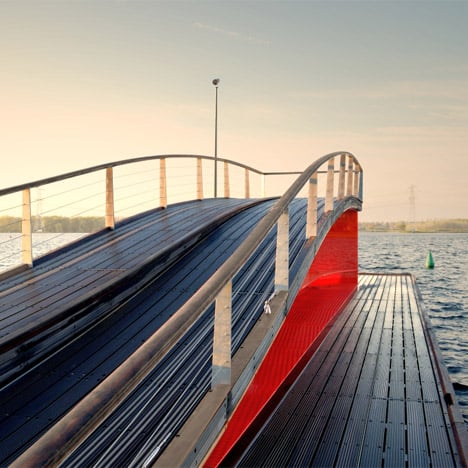 The aim was for this space to function as an informal public amphitheatre.

The third bridge in the series is the Rees WaveDeck – a 480 square-metre space conceived as "both a piece of art and a flexible gathering space". Like Spadina, it features a gently rippled surface that forms steps.

A section of the railings at one end of the deck can be removed to allow people to board small boats. There are also two 15-metre backless benches that provide seating for visitors.

The Parliament WaveDeck is still in development, with no completion date yet set.

West 8 has offices in Rotterdam, New York and Belgium. Other bridges it has designed include the Borneo/Sporenburg bridges in Amsterdam, the Cascara bridges in Madrid and the Garden of 10,000 Bridges in Xi'an, China.

Images are courtesy of Shutterstock, unless stated otherwise.