Our second featured bridge of the day is the Yangtze River Bridge in Wushan, China, which is one of the longest tied-arch bridges in the world.

The Wushan Yangtze River Bridge has a span of 460 metres, making it the seventh longest arch bridge in the world, and it has an overall length of 616 metres.

The structure was completed in 2005, although no architect or engineer is credited for its design.

It stretches between the raised banks of the Yangtze River, forming the only road link between the city and the region to the south.

Its most impressive feature is its grand arch, which is constructed of concrete-filled steel tubes. Its bright red colouring helps it to stand out against the surrounding greenery. 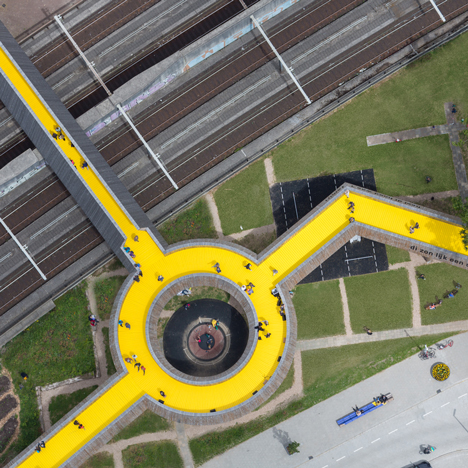 The road deck cuts across the arch, so trusses are located both above and below to connect the two structures.

The bridge also ranks among the highest in the world, although the reservoir created by the construction of the Three Gorges Dam to the east has increased the water level and the full 180-metre height clearance is no longer visible.

In the spirit of an advent calendar, Dezeen is counting down the days until Christmas with an A to Z of iconic contemporary bridges from all around the world. See all the bridges in our A-Zdvent calendar so far »