The Merge set includes a pen pot, a notecard holder and a tape dispenser, all made from a high-density concrete formula that is resistant to chipping or cracking.

Each piece comes in either grey or bright blue – a colouring created by mixing pigment into the concrete.

The cylindrical pen pot rests on a base that features a similarly tube-shaped dip, including space for holding writing implements as well as storing smaller items. 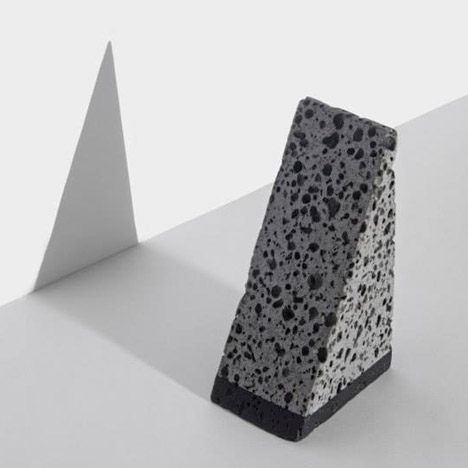 Its form is echoed in the shape of the notecard holder, which resembles a cylinder cut lengthways in half.

The tape dispenser is made from three conjoined shapes – a weighted rectangular base that holds a slender prism with the blade, and a cylinder-shaped holding section for the roll of tape.

"Beyond their necessary utility, each piece is designed with an attention to detail and a design philosophy that also gives them a distinctive sculptural quality," said Tseng, who graduated from the Konstfack University of Arts, Craft and Design in Stockholm and set up his own studio in 2011.

"The designs' graceful explorations of shape along with their use of the colour cyan of the CMYK colour model create products that are as much a piece of art as they are stationery," he added.

The pieces were created for Taipei-based 22 Design Studio, an office set up in 2005 to release stationery and other homeware products, often developed using concrete.

Tseng has previously designed a set of rubber candlesticks meant to feel like bicycle handlebars, and a clock that featured two pivoting arms as hands.