British designer Ewan Cashman has created a cement and wood floor lamp based on the shapes of spinning top toys he played with as a child.

The Pumpal light is named after the Bulgarian word for the spinning toy and features a circular white base that tapers to a point, attached to a long slender wooden body. Cashman based its shape on wooden spinning tops his mother made on a lathe when he was growing up.

The base is composed of hollow concrete, and provides the weight and balance that allows the lamp to be rotated 360 degrees – as a spinning top could be.

"I wanted to create an object of playful engagement as well as practicality," Cashman told Dezeen. "I like the idea of taking the form of a toy that we all understand and recognise, and seeing what practical purposes can be discovered from it."

A strip of LED lights is housed in the lamp's body and covered in light diffusing plexiglass. The light's cement and wood sections are joined together with a hollow steel rod used to transfer wiring as well as reinforce the structure.

"My background is in architecture, so I am often thinking about these materials, and ways in which I would like to see them being used and combined together," said Cashman.

"I would love to see a Pumpal family being used in an environment where perhaps the lighting requirements are varied, thus the lamps and their orientation must be adjusted to suit the evolving spacial requirements," the designer added. 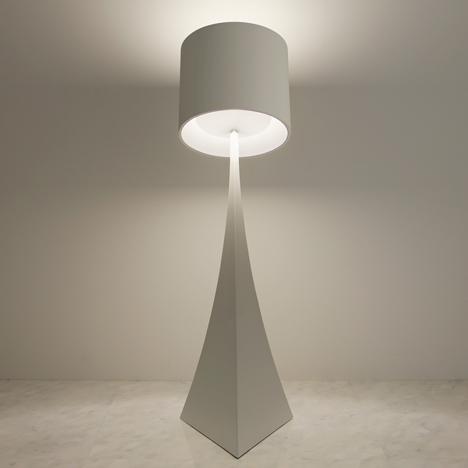 "I believe it is important to interrupt our daily cycles and routines with moments of fun and engagement. Where something as every day as switching the lights on becomes a playful action."

Australian designer Ross Gardam also launched a lamp with a rotating element, using a magnetic joint to create a shade that could be pivoted 360 degrees.

The Pumpal light was first shown at the DMY Design Festival 2015, which took place in Berlin from 2 to 5 June.