This Danish summer house by Norwegian studio Jarmund/Vigsnæs Architects is split into five buildings "like a miniature village" to enclose a wind-sheltered courtyard in the middle (+ slideshow).

Summerhouse in Denmark was designed by Jarmund/Vigsnæs Architects for a family of five and their dog. It occupies a windy site in a village at the northern tip of Zealand, the country's most populous island.

To provide shelter from the wind and create spaces where the family can be together or apart, the architects split the 123-square-metre home into five buildings, and arranged them around a central courtyard.

"The arrangement is like a miniature village," said the team, whose previous projects include an English holiday home for Alain de Botton's Living Architecture series.

"The layout is well-known in this area, often used for organising traditional farm buildings."

One building houses the kitchen, dining space and living room, and another contains utility space.

The other three blocks are for the bedrooms – one with a room for the parents, another with two bedrooms for guests, and one with three bedrooms for the children.

The central courtyard provides the main circulation route between the five buildings, while smaller terraces at the edge of the house provide more private outdoor spaces with views of the surrounding area. 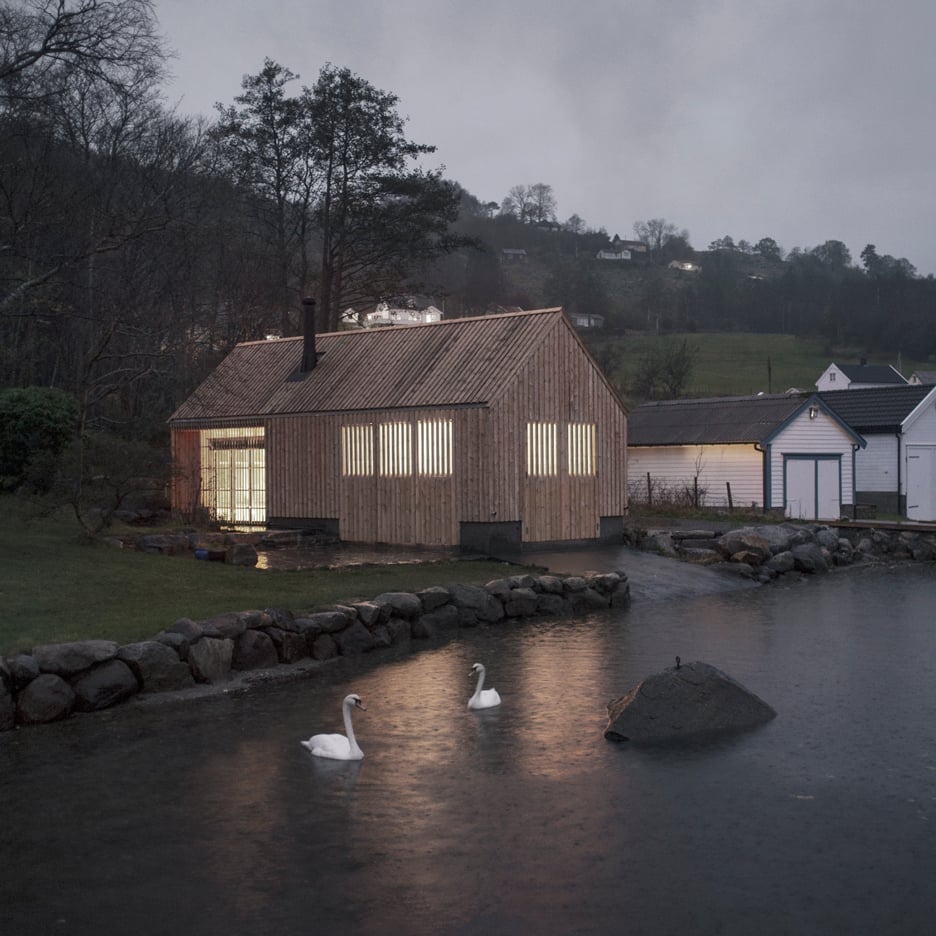 "This contrast between the inner courtyard and outer terraces was part of the concept for this house," the architects told Dezeen. "We believe this dynamic spatial relationship creates a stronger experience of the place."

Exterior walls are clad in corrugated aluminium – a material that can withstand the salty air of the coastal location – while the gable walls and exterior terraces, which the owners come into direct contact with, are covered in warmer, more tactile Siberian larch.

"We like unusual use of materials, and we also wanted to reduce the number of materials used for this house," said the architects.

The roofs of the five buildings vary in pitch, but all have the same height to create a sense of continuity throughout the house.

Some also have overhangs that almost touch their neighbours, further enhancing this sense of continuity between the buildings.

Inside, all surfaces are covered in timber, which is left natural for the flooring and painted white for the walls and ceilings.

"We wanted to give the interiors a wholeness, and a character fit for the place. This use of timber reflects a Scandinavian tradition," said the architects.

Rooflights throughout the buildings bring in more light and offer views of the sky, and the living area in the main building is set slightly lower than the kitchen to follow the slope of the land, and distinguish it as a separate, more secluded space in the home.

The house has with a timber frame, and construction was completed in eight months.

Oslo-based Jarmund/Vigsnæs Architects was founded in 1996 by architects Einar Jarmund and Håkon Vigsnæs. Other projects by the studio include a mountain cabin for hikers and a garden retreat, both in Norway.

Photography is by Torben Petersen.