The Carnivora collection has been designed as a follow-up to van de Weerd's Monstera plant pots, which balanced on long straggly legs that were meant to resemble dangling roots. 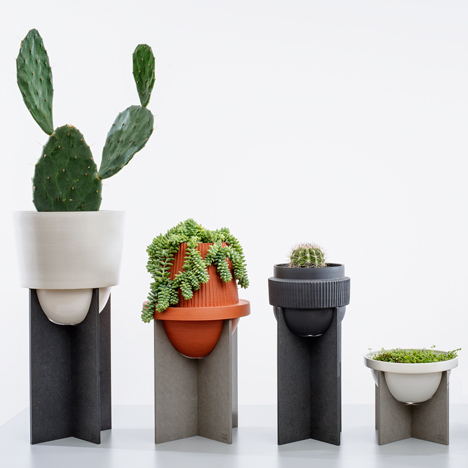 "Regular plant pots and planters are very static, rigid and don't give any credit to the natural origin of the plant," Van de Weerd told Dezeen. "To me they seem the ultimate form of cultivation."

"I wanted to design a plant pot that is more an extension of the plant rather than a separate object, cutting the plant off," he added.

The Carnivora planters feature glossy white cylindrical bodies that rest on short legs designed to look like they could move.

"Like their big brothers, the Carnivora are very playful and dynamic," said the designer. "These pots with small legs seem to wander off with their plants."

The vessels are available in different heights and each of the designs is subtly different, featuring three or four legs angled in different directions and arrangements. 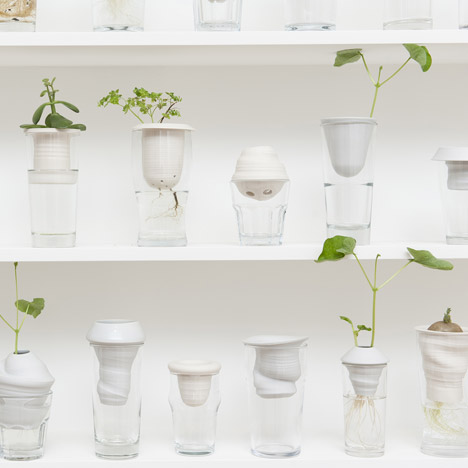 Other pots covered by Dezeen include Philippe Malouin's collection of geometric vessels, made from Caesarstone, and Royal College of Art graduates Begum and Bike Ayaskan's origami pot which can unfold to make room over time for growing plants.

Design graduate Alice Kim created an unconventional alternative to planters, proposing a plastic maternity vest that would allow the wearer to carry seedlings and young plants around with them.

The Carnivora planters were shown at the Klokgebouw building in Eindhoven during Dutch Design Week 2015, which ran from 17 to 25 October.