This house by São Paulo architects Denis Joelsons and Gabriela Baraúna Uchida is built against the steep terrain of the Mantiqueira Mountains in south-east Brazil and sheltered beneath a large sloping roof (+ slideshow).

Located just outside the village of São Francisco Xavier, Half-Slope House straddles a retaining wall left over from the demolition of a previous building.

It was designed by Joelsons and Baraúna Uchida as a weekend house for a couple of psychiatrists based in São Paulo.

The lower part of the plot is occupied by a large sunken living area encased in glass, while three bedrooms and bathrooms are set back into the upper part of the slope. Both areas are sheltered beneath a large sloping roof that mirrors the incline of the terrain.

"Built upon the retaining wall, this house's geometry manifests the encounter between the natural rise of the terrain and a manmade plateau," said Joelsons and Baraúna Uchida. "Above all, the construction lies in the intersection of natural terrain and human habitat."

While the 115-square-metre house could have fitted completely on the plateau, the architects chose this partially embedded arrangement to free up the flattest part of the site for outdoor activities.

The open-plan living area features a large sliding door, which allows the dining table to be easily moved out into the garden.

The house's brickwork and garapeira wood structure is left exposed throughout the interior, complementing floors made from burned ceramic tiles. A concrete fireplace stands at one end of the glazed sitting area. 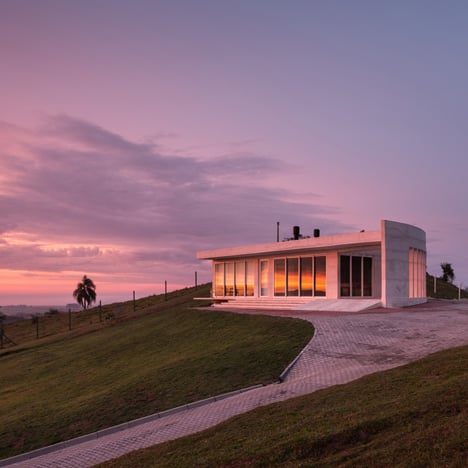 In contrast to the brightly-lit and glazed living area, the three bedrooms and bathrooms are half-buried in the earth. A long dormer window and clerestory glazing both help to draw light into this upper portion of the house.

A wooden door opens onto a gravel trail on top of the retaining wall from a corridor that links all three bedrooms.

This allows visitors to step outside without having to walk across the living space because "when it comes to a country home, outdoor leisure areas are as important as the indoors".

Steps lead down to the lower level where a glass door in the same gable opens into the living room.

"There is intent in the design to create diverse spatial sensations, which differ from what one usually experiences in everyday life in a city apartment," said the architects.

"In its essence, the project revolves around the act of building a house merged with its site; not as a mimic of nature, but as something that feels deeply rooted in its righteous place," they added.