CES 2016: footwear company Digitsole's Smartshoes connect to the wearer's smartphone or smartwatch to warm cold feet, track footsteps, and lace themselves up like the Nike trainers worn in sci-fi film Back to the Future II.

Launched at the CES tech fair this week, the trainer features laces that are hidden beneath the tongue of the shoe, and which can be tightened or loosened using an app.

The function is reminiscent of the self-lacing Nike Air MAG sneakers worn by actor Michael J Fox in 1989 movie Back to the Future II. Nike unveiled the first working pair of the trainers last year, with a video showing Fox testing out their "power laces" function. 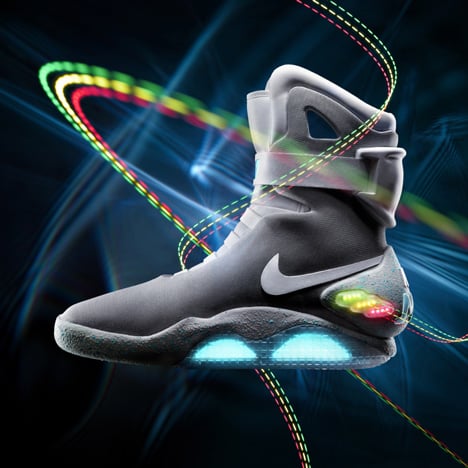 Nike plans to launch Back to the Future shoes in 2015

Several products that incorporate technologies predicted by the film have emerged since 21 October 2015 – the date McFly travels to – most notably a variety of hoverboards.

Digitsole's Smartshoe follows its Warm Series collection of insoles, which were launched last year and could be turned on via app to heat up cold feet.

The Smartshoe includes the same function, and wearers can precisely measure and control the trainers' temperature using their smartphone. Users can also keep track of how far they've walked and how many calories they've burnt, and input height and weight data to customise the shoes further.

According to Digitsole, the trainers will also include an integrated torch and "shock absorption measurement". The company says the battery will last for several days, and can be wirelessly recharged with a device that fits over the top of both shoes at once.

The trainers are set to launch in autumn 2016, and will be $450 (£307). CES 2016 is taking place in Las Vegas from 6 to 9 January. Also unveiled at the event this year is smart bra that allows women to track their activity and Fitbit's fitness-focused Blaze smartwatch.

In 2015, a Kickstarter campaign was to fund trainers that could connect to an app to show moving images on flexible exterior screens.