The Pritkzer Prize-winning architect worked with local studio Aresta Arquitectura on the Public Auditorium in Llinars del Vallès, which was commissioned as part of a public investment in cultural facilities for the region.

The complex is formed from two volumes, one containing a 300-seat auditorium and the other housing the theatre's offices.

The auditorium volume has three floors – one below ground containing technical equipment and two above containing the stage and seating.

Like the South Korean museum for modern art Siza designed with architects Carlos Castanheira and Jun Sung Kim – which is said to be inspired by a drawing of a cat – the auditorium building features a mixture of straight and curving walls.

The tiered seating area of the auditorium is topped by a gently curving metal roof. A brick fly tower that extends above this roofline is used to host the theatre's backdrops. 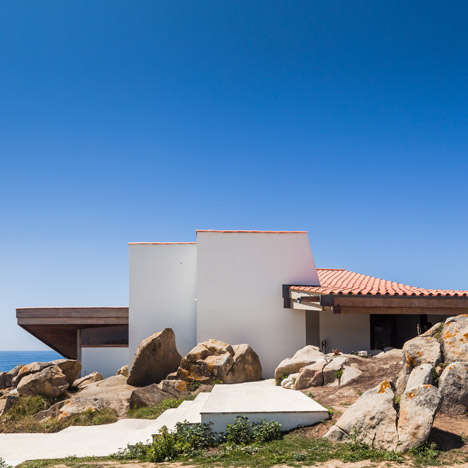 Dressing rooms, a rehearsal space and warehouse are set alongside administration offices in the accompanying two-storey block.

Staircases and service spaces are set outside the main volumes, creating a series of narrow outcrops that project away from the building and cast dark shadows over the red brick walls.

Long panoramic windows and glass doorways puncture the brickwork, which is imprinted with the manufacturer's markings.

Álvaro Siza is currently working on his first US project, a luxury apartment block in New York's Manhattan that will rise to 128 metres.

Among the 82-year-old architect's previous projects are a shrimp-shaped office building that sits in the middle of an artificial lake in China's Jiangsu province and the conversion of an old teahouse in his hometown of Porto into a seafood restaurant.

In an interview with Dezeen last year, he said his projects are never finished "because we never have enough time".