Herzog & de Meuron has completed its school of government and public policy at the University of Oxford, which is being officially unveiled to the press next week.

Designed to resemble an irregular stack of discs, the £30 million Blavatnik School of Government brings together staff, students and academics that were previously split across three different sites in the English city.

Herzog & de Meuron has organised the building around a space known as The Forum.

Classrooms and other teaching spaces surround the circular space, which can be used for exhibitions, presentations and impromptu discussions.

The lower ground floor contains two horseshoe-shaped lecture theatres, one for 120 people and one for 80 people.

A large flexible teaching space can also be used for lectures and conferences, but can be divided up into four smaller spaces for seminars and meetings. The building also features a series of small courtyards, positioned beneath skylights.

Describing the building back in 2013, Herzog & de Meuron likened it to "an auditorium or a concert hall with a series of interconnected terraces that step up from the ground floor all the way to the upper levels". 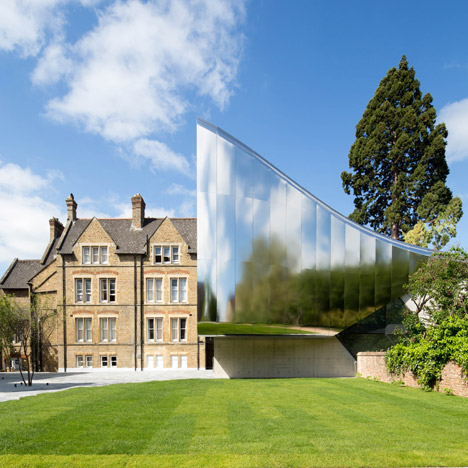 Students moved in at the end of 2015, but it is being unveiled to the press for the first time next week. However, Instagram users – including photographer Iwan Baan and an unofficial fan account for the architecture studio – have already started posting images of the building, as well as glimpses of the interior.

Other sustainable initiatives include a rainwater-harvesting tank, solar shading on the windows, low-energy light fittings attached to motion sensors, and a mixed-mode ventilation system.

The University of Oxford is one of the UK's most prestigious universities, and the Blavatnik School of Government is one of a series of new buildings it has proposed in recent years.

Zaha Hadid completed her Middle East Centre at the university's St Antony's College last year, while Hall McKnight, 6a Architects and DRDH Architects are among the studios shortlisted to overhaul St Hilda's College.

This quarter also includes both the new Mathematical Institute and Radcliffe Humanities, which offers facilities for philosophy and theology faculties.