Jeanne Gang's firm Studio Gang has completed a theatre that features an elevated glass box wrapped in bands of cedar.

The theatre company was founded in 1992 in the back room of a bookstore and later moved to a larger space within an ageing brick building owned by the Woman's Library Club, a local civic group.

With only 108 seats, the larger space eventually proved to be too small for the theatrical group, which was starting to draw audiences from across the Chicago metropolitan area. Plus, the building was in need of repair.

"They were playing close to capacity night after night, but with very few seats to sell and production costs steadily rising, they were in need of a larger, more flexible space to allow for their growth," said Chicago-based Studio Gang.

Ultimately, the Writers Theatre teamed up with the Woman's Library Club and the Village of Glencoe to devise a plan to raze the existing building. In its place, they set out to construct an entirely new performing arts centre that would catalyse economic growth in the area and serve as an important cultural landmark.

"The resulting design, with its transparency and flexibility, is intended to energise daily life in downtown Glencoe, creating an open, welcoming space where the potential of theatre to unite people across boundaries through shared experience is rendered visible," said the firm. 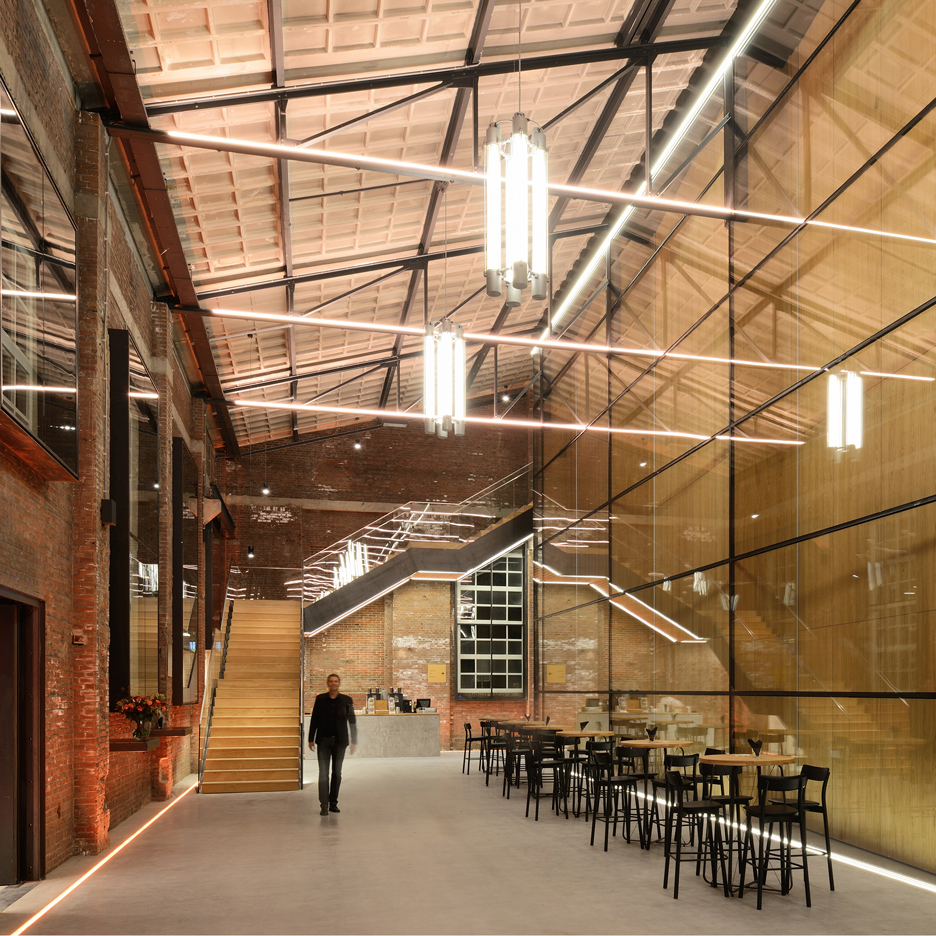 Mostly rectilinear and L-shaped in plan, the facility is clad in concrete with a plaster finish, glass and cedar battens and siding. It contains two performance halls, rehearsal rooms, offices, a lobby, and a donors lounge, along with a rooftop pavilion and green roof.

The double-height lobby features stadium-style bleacher seating and can serve multiple functions, from hosting formal events to serving as a casual space for performances and educational programs.

"In warm weather, this central hub opens to the adjacent public park and downtown, allowing the energy and interaction generated within the theatre to extend outward," said the firm.

"At night, it glows from within like a lantern, drawing interest and activity to this important cultural anchor and to downtown Glencoe."

A second-storey gallery rings the lobby, and provides views of a nearby lake and Chicago's skyline in the distance. The elevated walkway is supported by timber Vierendeel trusses and is wrapped with a wooden lattice that is hung in tension from the primary structure.

The main theatre is located directly off the lobby. Inside, tribune seating is detached from the walls, which enables "exciting actor entrances and other innovative staging opportunities", said the firm.

The 99-seat black box theatre, which is accessed from the lobby via a long hallway, can be configured in various ways. In both performance halls, the architect aimed to create an intimate environment.

"The design of the performance spaces is intended to maximise the sense of intimacy between actors and audience and to enhance the immersive experience for which Writers is known," said the firm.

Other recent cultural projects in the US include the new BAMPFA home by Diller Scofido + Renfro and a REX-designed performing arts centre planned for the World Trade Center site in New York.

Photography is by Steve Hall, Hedrich Blessing. Renderings, drawings and diagrams are by Studio Gang Architects.