New York fashion house Threeasfour has unveiled a pair of 3D-printed dresses based on biological forms and textures.

They form part of the brand's Biomimicry collection, and are intended to demonstrate the "possibilities unfolding at the intersection of fashion, design and technology".

Known for its complex designs and experimental use of materials, Threeasfour is led by designers Gabi Asfour, Angela Donhauser and Adi Gil.

The fashion house first began experimenting with 3D printing in 2013, in collaboration with Belgian company Materialise.

The two new dresses, described by Gil as "the most advanced 3D-printed dresses that we have created to date", were created in collaboration with New York designer Travis Fitch and Stratasys, a Minnesota-based manufacturer of 3D printers.

The new Harmonograph dress circles around the body in three spirals, mimicking the Fibonacci sequence. It is named after a mechanical device that uses pendulums to create geometric images.

The Pangolin dress is derived from a signature Threeasfour design that consists of 14 pattern pieces. In this new 3D-printed version, a single skin is created by mixing a variety of interlocking weaves. 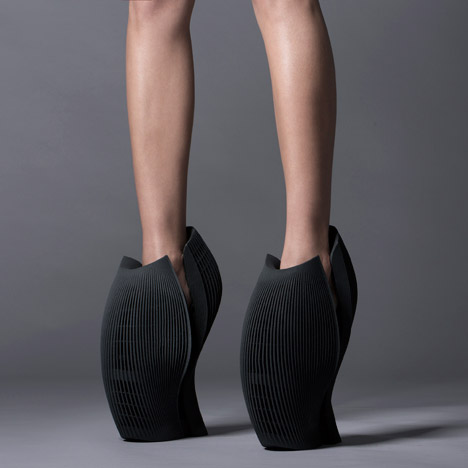 "The interwoven nature of the geometry could not be produced in a traditional manner, and it was critical to us that the design should evoke a language unique to 3D printing," said Gil.

The team utilised Stratasys' Objet500 Connex3 3D printer, which can print single objects with different colours and materials and enables designers to vary properties such as rigidity, transparency and porosity.

"The entire design, from its initial conception was intended to maximise the potentials inherent to this technology," said Gil.

"As artists and designers, it is our prerogative, and our nature, to explore the bounds of new technological opportunities, and to push the limits of the way in which forms are created," Gil added.

The dresses mark the first demonstration of a new material called Nano Enhanced Elastomeric Technology, which was developed by Stratasys. The acrylic-based material is meant to mimic rubber.

Given its extreme flexibility and durability, the material "represents a big step forward for 3D-printed fashion design," said Stratasys.

"The material will also be ideal for additional applications and industries, such as automotive, consumer goods, consumer electronics and medical devices," the company added.

The project is the latest in a series of collaborations between Stratasys and high-profile designers, including Neri Oxman, Iris van Herpen, Francis Bitonti and Zaha Hadid.

"Collaborative projects with talented and visionary designers, such as Threeasfour, are the ideal way to showcase to aspiring designers, students and creatives the types of organic and complex mathematical structures that can become a physical reality with 3D printing."

Other recent 3D-printed designs include bouncy shoes by Israeli designer Neta Soreq and sneakers from Adidas that have a 3D-printed midsole made from recycled fishing nets.

This May, the Metropolitan Museum of Art in New York will open an exhibition that explores technology's impact on fashion.

Photography is by Matt Carasella.