Students from London's Architectural Association have completed a robotically fabricated barn in a wood in Dorset, England, using timber harvested from the surrounding trees.

Five students from the AA's Design & Make course built Woodchip Barn as part of an annual programme at the school's forest campus in Hooke Park.

The barn will store the woodchip used to fuel a recently installed biomass boiler – an addition that will allow the campus to be sustainably heated using trees from the 350-acre park.

The arched roof structure is formed from 25 forked beech branches, and clad in timber. Each component was 3D scanned to determine the arrangement, and milled to form the interlinking connections with a robotic arm.

"The inherent form and structural capacity of the natural tree is transferred and exploited within the truss structure using 3D-scanning techniques and robotic milling to form the connection," explained the team.

"Based on the criteria of this structure, 25 forks were harvested from the forest, brought back to the campus and scanned in 3D," it added. "An optimising script was used to generate a final arrangement of forks in collaboration with engineers from Arup." 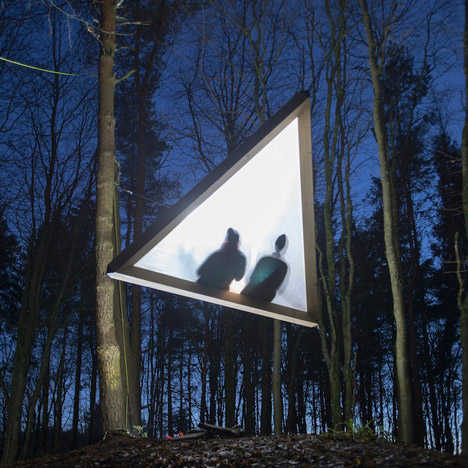 The system of trusses was assembled in Hooke Park's Big Shed – a faceted workshop created by students in 2012 – and erected on site under the guidance of Dorset craftsman Jack Draper. Three timber walls frame the interior, used for storing the woodchip.

While the pieces were processed with a robotic arm, their non-standard shapes were retained and joined without the use of custom-fabricated steel components.

The team wanted to consider an alternative to conventional timber construction, which relies on standardised parts.

"While complex and irregular trees are considered a nuisance by conventional forestry practices, forks and other curved timbers were understood traditionally as a valuable and strong building component – used intelligently to construct more efficient wooden boats and building."

"Used on materials in this near raw state, digital tools might help to recapture some of the depth of knowledge lost to industrialisation; and in doing so elicit exciting, unpredictable architectural forms derived directly from nature," it continued.

The structure joins three 20th-century buildings on the site, which were designed by architects and engineers Frei Otto, ABK, Edward Cullinan and Buro Happold for the Parnham furniture college.

Previous students projects at Hooke Park include a translucent pyramid suspended from the trees, a wooden cocoon and a pod-shaped retreat.

Photography is by Valerie Bennett and the Design & Make students.

More from the Architectural Association