Büro Ole Scheeren has unveiled designs for a hotel building made up of stacked horizontal blocks topped by plants for Chinese beach resort Sanya.

Located on the island of Hainan in southern China, the 160-metre-high Sanya Horizons will boast "hanging gardens" that can be experienced by guests.

Due to open in 2026, the tropical resort will also feature one of the world's largest infinity pools and a sky garden set 75 metres above the ground.

Scheeren's competition-winning scheme combines the two hotels in one large structure, allowing the rest of the site to remain a natural landscape.

"Rather than creating a pair of separated towers, the hotels are stacked on top of one another, thereby occupying a smaller footprint and liberating large parts of the natural landscape on the ground," said Büro Ole Scheeren.

"This strategic manoeuvre allows the combined massing to be more structurally and ecologically efficient, and creates a memorable and iconic silhouette along Sanya's shoreline."

Raised above a glazed entrance podium, the six stacked blocks will be curved towards the view of the ocean.

Plants will cover the roofs of each block to create the hanging-gardens effect, while the sky garden will be created within an opening in the building volume called the Horizons Window. 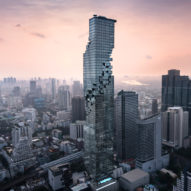 All guest rooms will have sea views and private terraces. Select rooms called Horizon Villas will also have their own private swimming pools, which will be slotted within the building's vertical openings.

The infinity-edge Horizon Pool will be set within a cantilevered structure, spanning 153 metres in width.

The building's facades will comprise hexagonal grids of recessed balconies and walkways, which will help reduce the building's energy demands by providing shade.

The horizontal openings will reduce the impact of wind on the building's structure, while the internal layouts are designed to facilitate cross ventilation.

"Through those strategic measures, combined with the integration of abundant greenery throughout the building, Sanya Horizons yields a highly environmentally responsible and sustainable performance in respect of the planet and beautiful nature surrounding the project," said Büro Ole Scheeren.

German architect Ole Scheeren established his firm in 2010, after making his name at OMA, and now has offices in Hong Kong, Beijing, New York, Berlin, London and Bangkok.

Stacked blocks, curved facades and sky gardens are common themes among his designs. Among his completed projects are the concave Duo towers and "vertical village" The Interlace.

In an interview with Dezeen in 2014, Scheeren said he was attracted to working in Asia because the continent has "a certain fearlessness and vision for the future".