Water is the only byproduct expelled from the exhaust of UK manufacturer Riversimple's hydrogen-powered electric vehicle.

Riversimple's Rasa prototype, which is reportedly capable of travelling 300 miles on a full tank of hydrogen, was designed to be as ecologically friendly as possible.

The vehicle incorporates an interior trim made from recycled plastic bottles and lightweight materials such as a carbon-composite chassis.

"I always like it when technology is pushed to its limit," designer Chris Reitz told Dezeen. "Looking globally at what kind of cars are on the market and what technology is available, I think we really are pushing it to the limit."

Compressed hydrogen is stored in a tank at the rear of the two-seater vehicle. When the vehicle is in motion, hydrogen passes through a small fuel cell where it reacts with oxygen to generate water and electricity.

The electricity drives the motors positioned in each of the four wheels, which are also designed to recover half of the energy produced when the vehicle is braking.

Recovered braking energy is stored in a compartment at the vehicle's front, and then served back to the electric motors for a boost in acceleration when needed. 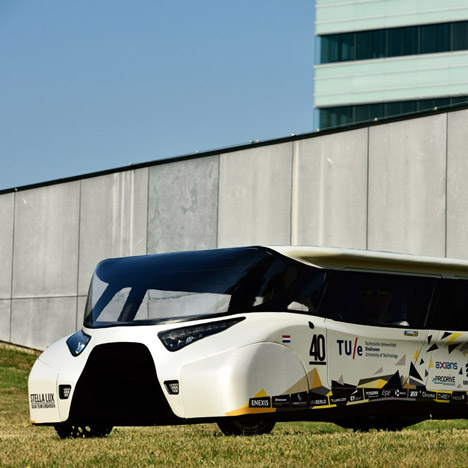 Solar-powered family car designed to travel over 1,000 kilometres on a single charge

Gull-wing doors – immortalised by DeLorean's DMC-12 sports car, which featured in hit sci-fi film trilogy Back to the Future – were fitted to enable people of all shapes and sizes to get in and out of the vehicle comfortably in tight spaces.

"It's much easier to step into the vehicle [with gull-wing doors]," explained Reitz. "Besides looking interesting, which we are obviously happy about, they are really functional."

Reitz created the vehicle's distinctive shape to be both functional for passengers to use and efficient when travelling through the air at relatively low speeds.

"The car actually sits very tall from the street because it is very effective aerodynamically at lower speeds," explained Reitz. "But we didn't want it to have this look."

The Austrian-born designer solved this aesthetic problem by designing side panelling that juts down at the rear, covering most of the hindmost wheels.

Riversimple's Rasa will only be available to users in a "sale of service" model, meaning that customers will not be able to buy and own their own Rasa model.

"For a fixed monthly fee and mileage allowance, [Riversimple] will cover all repair, maintenance, insurance and fuel expenses," explained a statement released by the company last week. "Customers will never actually buy the car and experience the burden of depreciation; they will simply exchange or return it at the end of the ownership period."

Riversimple is conducting a public trial of the vehicle later this year and working towards the development of a production model, which is expected to be available in 2018.

"The Rasa engineering prototype marks another key milestone in bringing an affordable and highly efficient hydrogen-powered car to market," said Riversimple founder Hugo Spowers. "The Rasa gives us the opportunity to introduce customers to a more convenient concept of motoring, a lightness of ownership that neither places a burden on the pockets of motorists or the surrounding environment. The car is simple, light and fun in every respect."

The automotive industry is increasingly producing low-emission vehicles. Elon Musk's Tesla has launched a series of fully electric models that can be recharged quickly, while Faraday Future recently unveiled an all-electric supercar.

Alternative methods of powering vehicles are also being investigated. Students behind "the world's first solar-powered family car" redesigned the vehicle to run for more than 1,000 kilometres on a single charge last year.