A tower with a large window rises above this New Zealand church rebuilt by Dalman Architecture, replacing the corner spire of the original building destroyed in earthquakes (+ slideshow).

The Christchurch-based architects designed the building as a reference to its predecessor, but with updates that correspond to the changing needs of the congregation.

"The new church aims to keep the volume set by the prior building in the existing urban space but reforms the space to align with the modern-day values of the congregation, such as openness, unity with the environment and tranquility," project architect Szymon Gozdzikowski told Dezeen.

The North Methodist Church had existed on the site for 100 years, but was demolished after receiving severe damage from the Canterbury earthquakes between September 2010 and February 2011.

Within the building, Dalman Architecture has combined a place for worship with spaces to be used by the community for other functions, including exhibitions and sports events.

A tall tower sits at the corner of the worship hall, in place of the original spire. It features a large window with a wooden frame in the shape of a crucifx, which faces the main street.

Inside, the hall has moveable seating and a platform below a faceted roof – lined with wooden panels in different directions – that slopes down away from the tower. 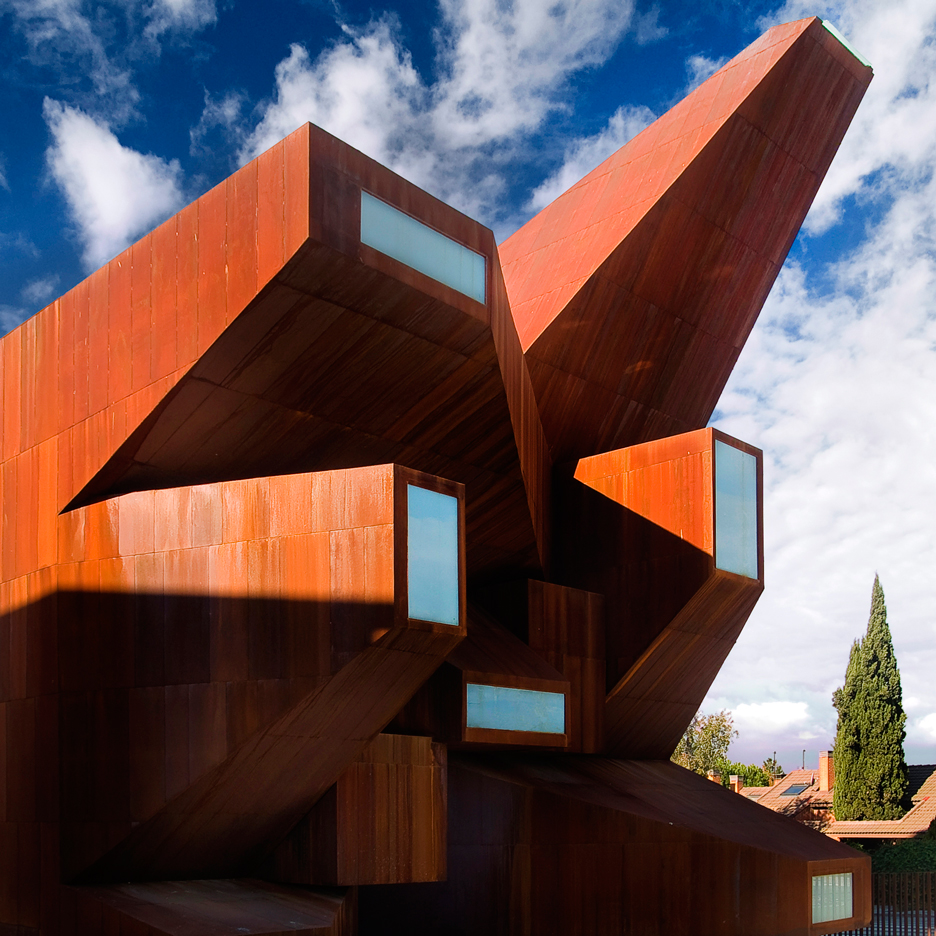 Two-metre-high windows positioned between regular columns form the longer sides of the worship hall, while the wall that faces the noisy street has smaller openings and doors to a garden.

Three double-doors lead from the hall to the foyer, which was designed as a spill-out space for meetings and functions, and as a connection from the street to an outdoor courtyard.

On the other side of the foyer is a community block designed for use by more than fifty different groups in the neighbourhood. The block is split into two areas, one for meeting and lounge rooms that open to a fenced outside area, and a larger space for sports activities.

A clerestory window placed where the roof of the hall extends above the lower function space lights the corridor between them.

"Being adequately wide and lit through continuous skylights this link becomes not only a comfortable circulation area but a significant element of the building, and could be used for exhibitions and as an interaction space for the community," Gozdzikowski said.

The entrance from the main street features an inclined roof that extends beyond the building as a way to physically open the church to the community.

"The slope itself encourages entrance due to its direction, guiding and welcoming the community inside," said Gozdzikowski. "This allows a clear path in, while maintaining openness and transparency throughout the building."

Timber clads the first two metres of the building, and a mix of white plaster and black metal covers the rest.

"The timber was used to represent the natural elements of the space," explained the architect. "Timber appears where human interaction occurs, in the hallways and worship spaces, connecting the area to the environment."

The earthquakes in New Zealand destroyed and damaged a swathe of buildings, including the historic Christchurch Cathedral. Shigeru Ban completed a temporary Cardboard Cathedral for the city in 2013, while architects and critics called for George Gilbert Scott's structure to be restored to its original gothic appearance after rejecting two contemporary proposals.

Other churches recently completed include a pre-rusted steel church by Vicens + Ramos featuring an "explosion" of windows and a chapel in Slovenia with a crown of protruding bricks.

Photography is by Stephen Goodenough.