Stockholm 2016: Stockholm designer Stefan Borselius has created a "sensual and intelligent" sofa for Swedish brand Fogia, featuring curved shapes that he claims are based on the Piazza del Campo in Siena, Tuscany.

The seating features softly rounded oval armrests, and is supported by stubby wooden legs that are available in natural or stained oak.

The sofa comes in various configurations, including a two-seater and corner version, and can be adapted to a user's specific needs.

Campo takes its name from the Italian word for countryside, as well as Siena's semicircular piazza – which Borselius cited as his reference for the soft shapes of the furniture.

"Campo is invitingly lush along with an almost strict formal language," said Fogia, which has also collaborated with Norwegian designer Andreas Engesvik on seating.

The brand, which launched a modular shelving system by Note Design Studio this year, described Borselius' design as "sensual and intelligent". 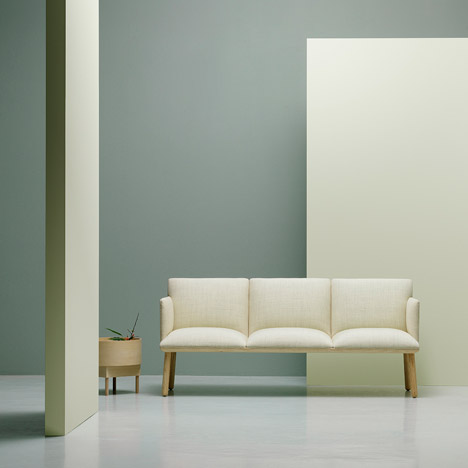 "Sit up or lie down, together or just resting alone," it said. "Campo is an open invitation to explore its many possible uses."

Borselius designed the furniture as a contrast to the "hard and unyielding armrests" of other seating, creating Campo as a comfortable sofa that will encourage owners to relax. Cushions include extra layers of elastic foam, which have been topped with down.

The designer previously collaborated with the brand to create a set of minimal chairs in 2014, followed by a modular sofa system that was unveiled last year.

Borselius also teamed up with a group of fellow Nordic designers to create Fogia's SAM wooden dining table, which is easily disassembled for storing and transportation.

The Campo sofa was shown at this year's Stockholm Furniture Fair, which ran from 8 to 13 February 2016.

Other highlights from the fair included Form Us With Love's club-style armchairs,  Alexander Lervik's fold-away tables, and a set of revolving bookcases designed by Folkform.