Glass walls provide woodland views from inside this structure by Japanese architect Takuya Hosokai, which contains a market and restaurant serving only locally produced food (+ slideshow).

Named Plate, the complex was designed by Tokyo-based Hosokai and his team for a patch of dense forest in Japan's Niigata Prefecture –  described by the architect as a "dreamlike backdrop". 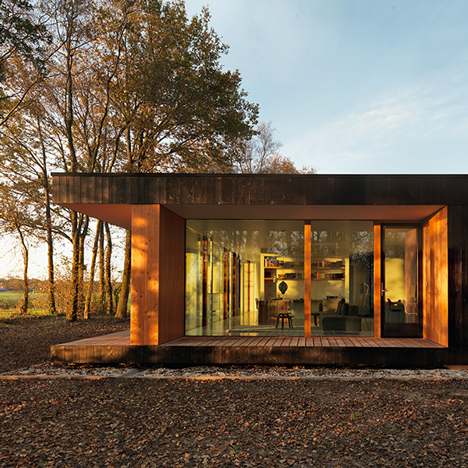 In line with the movement's principles, the 270-square-metre structure contains a market selling produce farmed in the region and a restaurant serving dishes that use locally grown ingredients. It also houses a community events hall.

"The building is orientated to appear as if it is submerged in the forest, in order to help visitors detach from their everyday lives and experience the forest from the inside," said Hosokai.

"Visitors can enjoy the sight of the roots emerging beneath their feet and leaves flourishing overhead."

While visitors to the mostly glazed structure benefit from the dappled shade of this dense foliage in summer, the site is subject to heavy snow during winter.

In response, the architect gave the market, kitchen and event space each a separate mono-pitched roof, which are all designed to disperse and support up to a metre of snow.

A truss was added between the gable walls and roof for increased stability, and some columns were also installed for additional support.

"Although seismic activity was a major concern regarding the structural design, it was important that east- and south-facing walls provided clear, unobstructed views of the forest," explained the architect

Innovative roof designs have also been adopted by architects designing for other snow-prone areas of the country.

Architect Hiroki Tominaga gave a house near Mount Fuji a zigzagging roof to help snow slide off, while Archi LAB designed a stilted top-heavy house to minimise snow drift around its entrance.

The roof of the centre could potentially be extended to encompass new structures added to the complex in the future.

"The project will retain a sense of ordered chaos; the architecture will grow organically as it is passed on to future generations," explained the studio.

Takuya Hosokai, who set up his practice in 2005, previously collaborated with Hiromasa Mori to design a hair salon with a tilted facade in Fukui and a blackened timber house with a pointed roof in the same city.

Photography is by Naomichi Sode.