London studio Brinkworth and designer Michael Marriott have overhauled an old pub inside and out to create a second branch for chicken restaurant Bird.

The architects took a similar approach to their design for the first Bird outpost in London's Shoreditch when designing the new in nearby Islington.

Celebrating the building's 1930s architecture, they restored its original facade to reveal glazed bricks and signage. The interior was also stripped back to uncover brickwork.

"The patchy, mismatched brick wall to the rear of the space was a perfectly contrasting backdrop to the bright white neon Bird logo," said Marriott. "The brick adds a rich layer of texture and life to the venue." 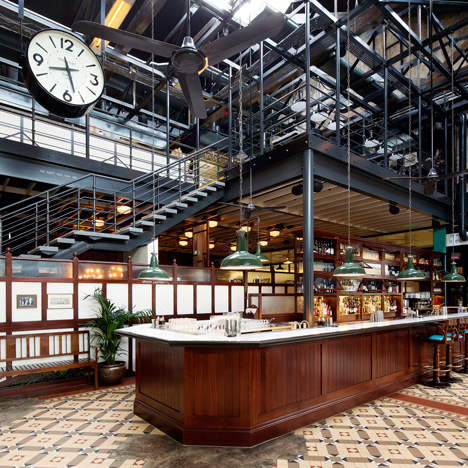 Blue-coloured tabletops are set between oak banquette seating and provide private booths by the restaurant windows. High tables are arranged in a grid-like formation in the centre.

Florescent lighting tubes are encased within perforated orange metal shades to match smaller tabletop lamps. The furniture and lighting were designed by Marriott for the space.

"It was a great process to work together with Michael on the product development and prototyping for the new tables and lights," said Brinkworth director Sonny Cant. "We have used the signature orange perforated steel, coupled with the new perforated brick, to create a strong brand aesthetic across the whole space".

The restaurant is situated on Holloway Road, close to the Emirates Stadium – the home ground of Arsenal football club – so the architects had to ensure the venue could accommodate large crowds.

Special match-day menus and counter ordering were included to provide faster service. Stools can be removed to allow for more standing room at the high tables. 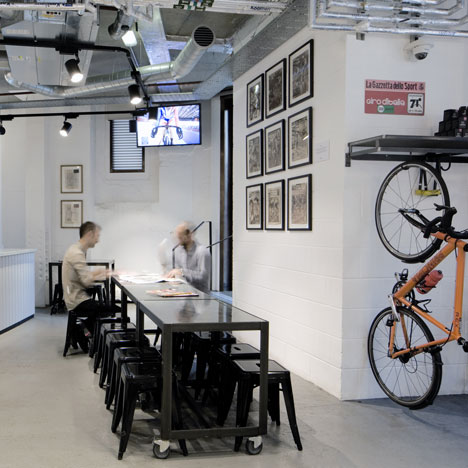 Bird Islington will be followed by a third site in the chain, planned to open Camden towards the end of 2015.