The From The Ground Up project is based around the "obscure significance of the mineral feldspar".

Alfredsdottir wanted to draw attention to the group of minerals, which make up around 60 per cent of the Earth's crust and are a key ingredient in many everyday objects.

"With technological developments, urbanisation and increased consumerism, among other factors, we've grown disconnected from where and how our material resources are originated," Alfredsdottir told Dezeen.

"The project gives a nod to the rich history we have with this material and our reliance on it, to highlight it's not so commonly known importance and to revive our former respect for it," said Alfredsdottir. 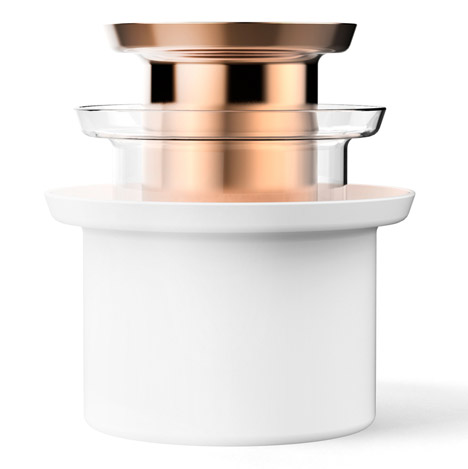 Kenyon Yeh's Flue vessels stack inside each other

"To be aware of what you are eating your food on is an equally fascinating story, to understand the transformation of the material from its natural state until it sits at your table," she added.

The designer chose to create glasses, plates, bowls and jugs that stack to create a "totem". Each item is made using a different material – including porcelain, clay, granite, glass and silicone – but are united by the fact that they are manufactured by using feldspar in some way. 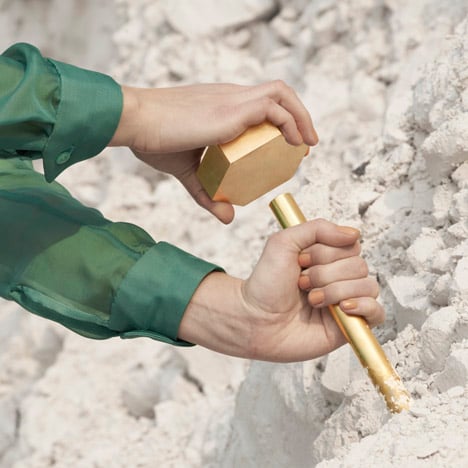 "The totem creates interrelations through the set which, when constructed, stands upon its common origin from the stone itself," Alfredsdottir told Dezeen.

Feldspar is used to lower the melting temperature of silica sand and provides added sodium when creating the glass of the cups and jugs, while in the silicone-making process it is used as a filler to give the material strength.

During the making of the ceramic pieces, feldspar was used in two ways. "Through chemical weathering feldspar breaks down into Kaolin which is what we know to be clay," said Alfredsdottir. "In addition to that, feldspar is added to clay mixtures, which when heated, melts down into silica-rich liquid that works as a glue between the kaolin and the silica, giving strength to the piece."

The porcelain used by Alfredsdottir is made from a combination of Cornwall feldspar and China clay, while the purest material, granite, contains the highest percentage the mineral.

Alfredsdottir created the first "totem" as part of her Design Products MA at London's Royal College of Art, and produced a second for Reykjavik's annual design festival DesignMarch, which took place from 10 to 13 March 2016.

London and Montreal designer Emilie F Grenier has also worked with feldspar, creating a set of luxury brass tools and a silk outfit for mining the mineral.