A wall of salt, railway clocks and a rock hung from red climbing ropes all feature in artist Rolf Sachs' Swiss-influenced restaurant at Zürich's The Dolder Grand hotel (+ slideshow).

The Saltz restaurant opened last week at the historic hotel, which first welcomed guests in 1899 but was extended by UK firm Foster + Partners in 2008 to include 175 rooms and an extensive spa.

"The restaurant in a hotel is always a difficult thing," Sachs told Dezeen. "They came to me because they wanted something different, otherwise they would've gone to a decorator."

Located on the lowest floor, the restaurant features a fully glazed wall that offers panoramic views over a terrace and beyond to Lake Zürich.

But Swiss-born Sachs was keen to divide up the space into areas and levels with distinct atmospheres, so diners won't just want to sit by the window.

This division also helps to deal with the room's awkward triangular shape. "It's a very difficult space to geometrically work out," he said. "Each corner is approached very differently." 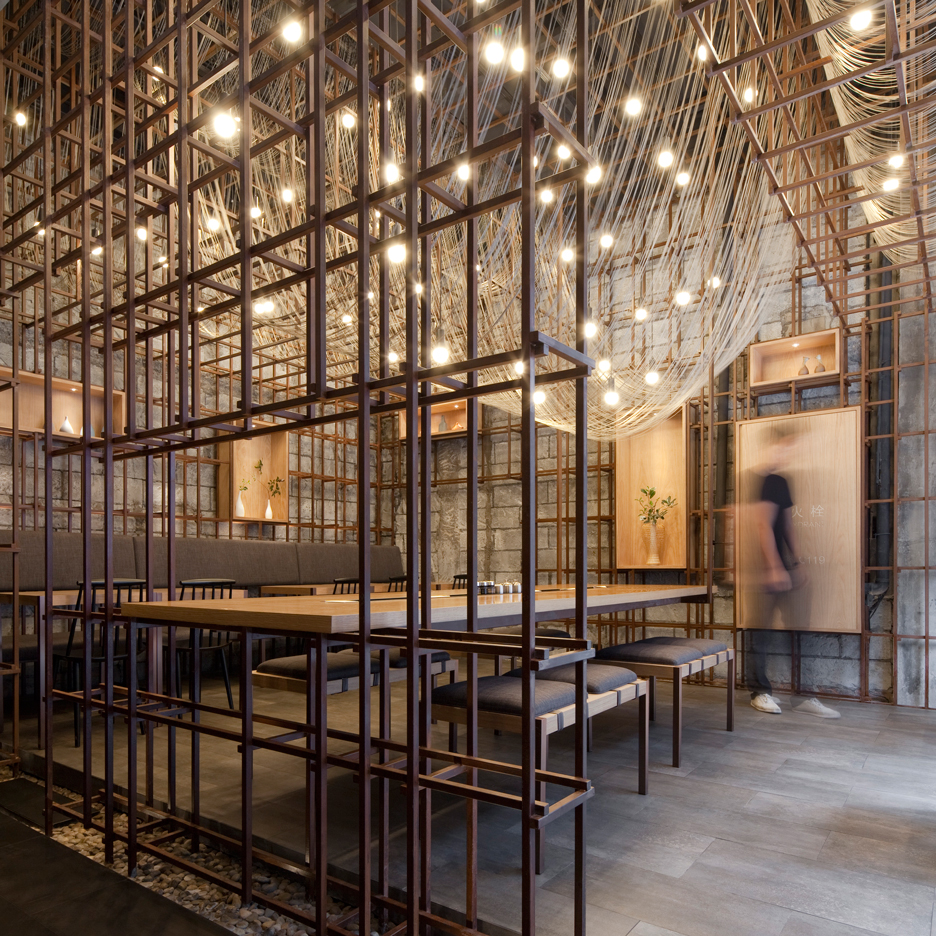 "Everything has something to do with Switzerland, in a subtle way," he added. "I had to be careful that it didn't get cheesy."

On one side, a raised area is coloured entirely in red – the dominant colour on the Swiss flag – and a jagged neon light mounted on the wall is designed to look like the country's mountainous landscape.

Along the other main wall, transparent panels hold salt that has settled into striated patterns.

Behind the crystals, white lighting glows through as letters that read "Das Salz in der Suppe" – a German phrase that translates in meaning similarly to the English phrase "the icing on the cake".

Here, the furniture is the same as on the opposite side, but the upholstery and tabletops are grey and the flooring is oak.

The wood continues across the floor at ground level, where a row of bright blue sofa-like seating faces a zinc-clad bar. Felt panels cover a couple of walls, while others are simply painted white.

"I always love materials with a soul," said Sachs. "I work a lot with felt, with wood."

In the centre of the space, a large chunk of stone sourced from the nearby Julier Pass hangs from a series of red climbing ropes and carabiners – referencing Switzerland's outdoor pursuits.

"We actually had a hard time sourcing the rocks," Sachs revealed. "They were either too round or too thin, and they had to have a bit of character."

Balanced just above the ground, the installation looks like a rugged version of a children's swing.

The ropes are also strung into a web across the ceiling, while smaller rocks are attached to a white wall "like a painting".

"Rock is so powerful, and nature is the best sculptor," said Sachs.

At the entrance, rows of Swiss railway clocks – famous for their red second hand that pauses for a second at the 12 o'clock marker – all display the same time and are each named after one of the country's aviation waypoints.

Sachs usually works with sculpture and installations, such as a piece at the V&A museum for which drops of coloured ink fell six storeys into a glass tank below. His furniture designs include a table made from two sledges and chairs cast from resin.

But the London-based artist and designer has also renovated a Bauhaus building and designed the interior for a ski club house in the Alpine resort of St Moritz.

Photography is by Nico Schaerer.