British actor and comedian Sacha Baron Cohen is promoting his new film by releasing a video of him mimicking Jonathan Ive and delivering an Apple-style presentation about his latest character (+ movie).

Baron Cohen – who is currently promoting The Brothers Grimsby, in which he plays the main character Nobby – described the film as having a plot "15 per cent thinner than any of our competitors".

The film focuses on Baron Cohen's character, who lives in the English fishing town of Grimsby with his girlfriend and nine children, and his reunion with his long lost brother, an on-the-run MI6 agent who needs Nobby to help him prove his innocence and save the world.

In the promotional video, a group of fans are shown outside the building where the presentation is supposedly taking place, emulating the queues outside Apple presentations. The fans describe the actor as an "innovator", "visionary" and "prophet".

Inside, Baron Cohen is seen standing on a grey stage with a blue background and a large screen, mimicking the set-up used by late Apple CEO and founder Steve Jobs, and latterly current CEO Tim Cook, for the company's annual product launches.

Dressed in a blue V-neck tshirt – a reference to the style of Apple's senior vice president of design Jonathan Ive – the actor discusses his "products" in a British accent that echoes Ive's.

Baron Cohen also mimics some of the phrasing used by Apple in its product launches to describe how he created his past and current characters.

"Let's remind ourselves where this all started," says Baron Cohen in the video. "20 years ago we created our first product, the Ali G. Three years later we introduced our next character – retaining the sexism and stupidity of Ali, we added a moustache and anti-semitism to create the Borat." 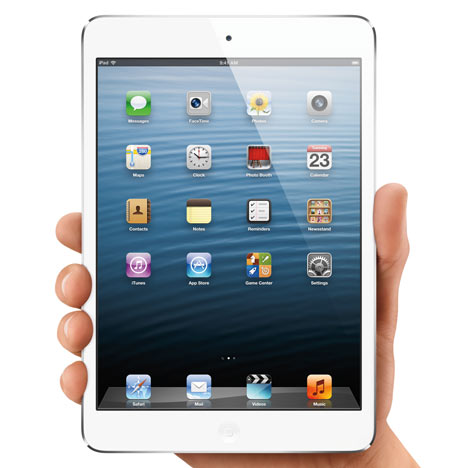 Jonathan Ive to lead both hardware and software design at Apple

"After the amazing success of the Borat, we asked you what you would like to see in our next product," he continues. "You told us likeability, you said subtlety and heterosexuality. We gave you the Bruno. That product was the first ever to feature a completely bleached anus."

"But hey, what's next?" says Baron Cohen. "Well our engineers have worked night and day to bring you something that we're really proud of. We call it The Nobby."

"In The Nobby we have built from the ground up a character with 12 per cent more likeability than even the Borat and made him 15 per cent more idiotic than the Ali G."

Baron Cohen invites viewers to "have a look at some the unique design features of The Nobby", which include a shaved chin that free up his mouth to allow him to deliver "24 per cent more expletives".

Images of pie charts, characters and film clips appear on the screen behind the actor as he speaks, and canned laughter and clapping are played in the background.

The video also cuts to another film of Baron Cohen against a white background. This references Ive's appearances in Apple presentations, which are pre-filmed.

"This thinness, this slenderness, allows a lot more time for a new feature we've called destructive mindless violence," adds Baron Cohen, in a thinly veiled reference to Apple's presentation of the iPhone 6 in 2014.

Baron Cohen also discusses his team's "innovation" in taking "the sexual depravity that you guys have grown to love over the years" and expanding it "to places that you wouldn't even imagine were possible".

"The Brothers Grimsby is our finest, most advanced product yet," he concludes. "We've grown to love it and we believe that you will love it too. So thank you and goodbye. You guys are amazing."

Apple's annual September product presentations in California have become as recognisable as its product designs among fans and followers of the company, thanks to their repetitive format.

In 2015, the company launched it's larger iPad and pencil-style stylus at the the event.

Baron Cohen is not the first person to mimic Apple for promotional purposes. Ikea created an Apple-style video for the launch of its 2015 catalogue.

Baron Cohen grew up in London and first became famous in the UK with his character Ali G – described as an "interviewer, singer, rapper, junglist" – a spoof of a white British suburban male who imitates rap culture. He went on to host Da Ali G Show, which was also given a series in the US.

He attracted international controversy in 2006 with his first film, Borat: Cultural Learnings of America for Make Benefit Glorious Nation of Kazakhstan, which was a mockumentary about a character from Kazakhstan journeying across America in an attempt to meet and marry Pamela Anderson.

This was followed by the release of Bruno, a film about a flamboyant Austrian fashion TV presenter, in 2009 and The Dictator in 2012, in which Baron Cohen satirised Libyan dictator Muammar Gaddafi.