The Seville-based pair, who call themselves Estudio Extramuros, took it in turns to create one drawing a day and shared the results on their Instagram page.

Over the course of 100 days they created a series of graphical drawings showing some of the most important architectural projects of the last century, including buildings by Alvaro Siza, Louis Kahn and Alvar Aalto.

They saw it as a chance to rediscover figures that have inspired them, but also to provoke discussion about new architecture.

"Architecture is a part of our everyday lives, it shouldn't be considered elitist to talk about it," the duo told Dezeen.

"It's difficult to read a plan and section, but it's not that difficult to see an illustration and feel curious about the architecture behind it," they said. "We're pretty happy with the result, if it means sparking curiosity."

The series was born out of an initiative launched by The Great Discontent magazine, called The 100 Day Project. The brief is to pick an activity and repeat it for 100 days. 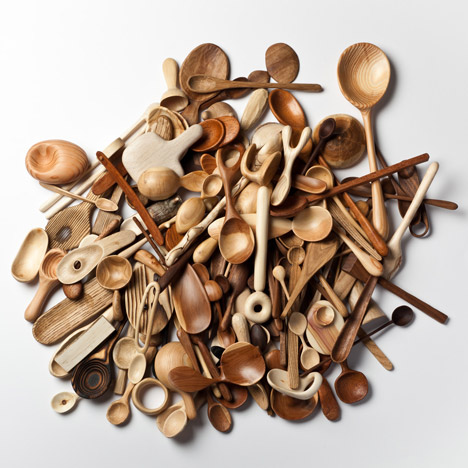 Despite having no real experience in illustration, Muñoz and León decided to chart the projects that have influenced their work in some way, as well as ones they have some personal connection to.

They limited themselves to between 45 minutes and an hour for each one.

"We started with a list, brainstorming names of architects or buildings, but it only lasted a couple of days, after that it was very impulsive," explained the pair.

"There was no calendar, and no obligation to illustrate certain architects considered 'the masters'," they said. "We decided to be as free as possible and sometimes the style changes a bit, depending on the illustration."

But there are also small-scale projects including a wooden pavilion by Anne Holtrop and a treehouse by Terunobu Fuji, as well as site-specific artworks by Gordon Matta-Clark and Robert Smithson.

The architects chose not to feature any buildings by Ludwig Mies van der Rohe, and instead created a portrait of him making a joke.

They also admited to having made a few they were unhappy with, which they replaced later on – notably the ones for Siza and Khan. "We set the rules but we also cheated when it felt right," they said.

"After all, it was about having fun and liking the project, rather than dreading it and seeing it as a chore to be completed," they added. "And we just couldn't leave Siza and Kahn that way."

At the end of the project, Muñoz and León exhibited the drawings at arts fair BlurFair in Seville. They have since received feedback from some of the featured architects. "We were startled," they said.

One-a-day projects have become increasingly popular over the last few years, as platforms like Instagram and Tumblr make it very easy to publish a stream of images.

Graphic designer Sarah Hyndman created a series of alternative logos during the 2012 Olympics, while Norwegian designer Stian Korntved Ruud carved one spoon every day for a year to explore different types of wood.

On a larger scale, Martino Gamper created 100 chairs over a period of 100 days – a project that went on to be recognised by the Design Museum's Designs of the Year.