Future Makers: in this movie filmed by Dezeen in Munich, Clemens Weisshaar of Kram/Weisshaar explains how the design studio's Robochop project allows online users around the world to harness the power of a robotic arm.

Launched in March this year at the CeBIT technology trade show, the Robochop project by Stockholm-based Reed Kram and Munich designer Clemens Weisshaar allows people anywhere in the world to remotely carve a bespoke sculpture or piece of furniture out of a 50-square-centimetre cube of foam.

"There are more than 1.5 million robotic arms working on this planet right now and usually they do quite boring repetitive tasks," Weisshaar says. "What we're trying to do is make full use of the potential, which is to do different things each time you use them."

Kram/Weisshaar created a custom piece of software to enable users to simply and intuitively take control of a standard industrial robot, which is more commonly used to manufacture products such as cars on a production line.

The studio's web-based app allows users to create a design of their choice by using hand gestures on a touch screen. The app then creates a set of instructions for the robot, which uses a hot cutting wire to carve the foam block to the user's specifications.

"What we're doing is building software that eliminates all barriers and allows people from across the world – anyone with a smartphone or a computer – to use this robotic cell to design a piece of furniture or a sculpture, whatever you want to do," Weisshaar says.

At CeBIT, Kram/Weisshaar set up four robotic arms, which produced products designed by users in over 60 countries. Weisshaar believes giving people around the world access to such high-end manufacturing technology is very exciting. 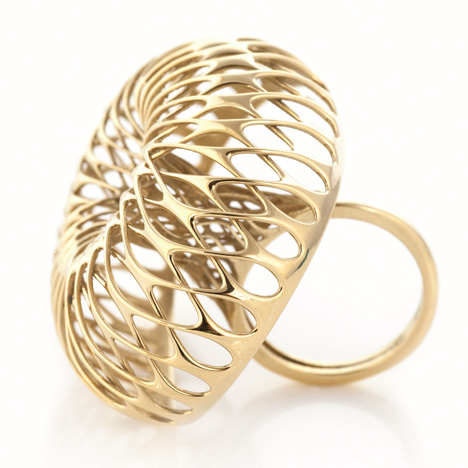 "People were hitting this thing from places like Congo, from Mongolia," he says. "And that fact alone – that you remotely allow people to access manufacturing – that in itself is really interesting."

Based on people's reactions to Robochop at CeBIT, he also believes there is a clear business case for developing platforms such as Robochop further.

"What's even more interesting is the economy developing around it," he says. "People came up to us asking to purchase individual pieces. You create objects and you also create demand – so there's a market for this."

Weisshaar admits that being able to carve a block of foam has limited uses, but says the studio is developing new versions of Robochop that will be able to manufacture objects in harder materials.

"Using foam is a sketch – it's an idea, it's a proposal but it's not a final object," he says. "We're very interested in cutting other materials and we're currently working on that."