Andrew Simpson Architects has converted a red brick warehouse in Melbourne into a loft-style residence, with separate entrances for different members of the resident family (+ slideshow).

The 19th-century warehouse is located in the city's Fitzroy North suburb and was previously occupied by businesses including a jam factory, an aerated water factory, an advertising agency and an engineering consultancy.

The Melbourne studio was asked to transform the two-storey building, known as the Water Factory, into a 440-square-metre residence with a flexible layout for an extended family.

"This was primarily an interior project," explained architects Andrew Simpson and Emma Parkinson.

"The footprint of the two-storey building coincides with the site boundaries, and the significant heritage constraints limited options for altering the external envelope of the building."

"To address the need for multiple possibilities for extended family living, the design is conceived as a collection of houses contained within the broader envelope of the building," they added.

The architects organised the majority of the living spaces on the upper level, leaving the ground floor free for other uses. They then drew up a plan that creates separate entrances for different family members.

The main staircase is located at the centre of the plan, and can be accessed from both of the two ground floor rooms. Both of these rooms have a separate access to the street, and one can be screened off using sliding doors.

Both spaces have also have access to a large garage to the rear of the property, which features a translucent doors, exposed brickwork and is used to store the client's red Ford Mustang car.

On the first floor, an open-plan living room, dining space and kitchen wrap two sides of the stairwell in an L-shaped arrangement, while a bathroom, laundry room and bedroom occupy a corresponding space on the others. 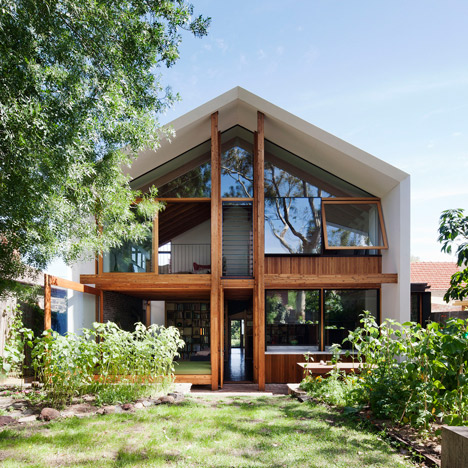 Original ceiling trusses are exposed across the ceiling, with a set of new skylights set in between. But part of the roof has been boxed in to store electrical and mechanical services, creating a zigzagging form.

"To draw light and ventilation into what is a poorly oriented and deep footprint, an extensive number of operable skylights were introduced on the north- and south-facing roof pitches," explained the architects, "and a large void connecting the ground and first floor was strategically positioned to also take advantage of this amenity."

The skylights correspond with the glazed ceiling and wall of the primary bathroom, which is contained in a white house-shaped volume that give it privacy from the staircase.

Other rooms have a more flexible layout, which can be joined or separated from the living space with white sliding doors.

A ladder fixed to the same runners as the doors leads up to a space in the apex of the pitched roof.

"What are conventionally regarded as cellular and isolated spaces within a house are imbued with a sense that they are provisional areas that can form part of the open plan or be used for more private purposes," said the team.

The gabled roof of the garage can be seen peeking above a terrace placed adjacent to the upper floor space.

The inner-city suburb of Fitzroy North is primarily comprised of single- and double-storey Victorian and Edwardian buildings, many of which have been converted or restored into housing in recent years.

Melbourne studio Nic Owen Architects designed a striking steel and glass extension that is hidden behind the ornamental facade of one Victorian terrace in the area, while local office BLOXAS borrowed elements from Japanese architecture to create a periscope-shaped addition for a home overlooked by a red brick factory.