Milan 2016: rounded trays extend from the sides of these bathroom fixtures by German designer Sebastian Herkner for Italian brand Ex.t.

The Plateau collection, which will be presented during Milan design week next month, is Herkner's first venture into bathroom design.

It follows on from a similar collaboration between Ex.t's and Danish studio Norm Architects, shown at last year's event, which included a matching wash basin and bathtub perched on slim metal legs

Herkner aimed to create a set of stylish but useful products, and experimented with different shapes to come up with a series of functional pieces including a bathtub, a washbasin, a mirror and a lamp.

Every piece in the collection features a tray in the form of a shallow lip, referred to as a "sidetracking plateau" by the designer.

"The sidetracking plateau became the stylistic leitmotif for the entire collection," said Hernker. "Functional and elegant, this detail is a feature in every piece from the bathtub and washbasin to the mirrors, just as a shadow in movement sets down on different surfaces whilst keeping its shape." 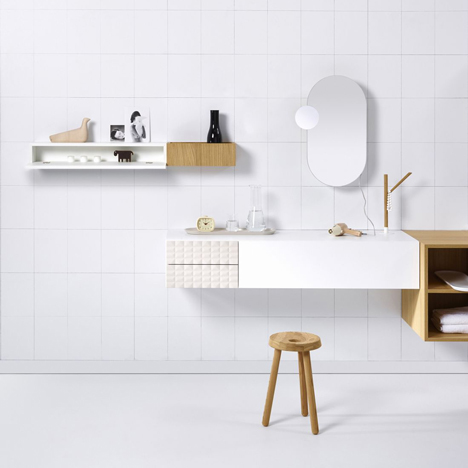 An oval-shaped bathtub features a tray that appears to extend from its sides. Depending on the layout of the space, the tray can be added to the left or the right side of the tub.

"The tray embodies aesthetic and functionality working as a finer detail as well as a useful support to keep your belongings or products close to you whilst you are comfortably soaking in a bath," said the designer.

A similarly shaped washbasin is available with a freestanding column or as a counter top sink.

A series of mirrors feature a translucent glass detail on the side, giving the impression of a shadow behind.

Hernker's Plateau collection will be shown by Ex.t at the International Bathroom Exhibition – part of this year's Salone del Mobile furniture fair, which takes place from 12 to 17 April 2016.

Other designs that will be on show during Milan design week include a collection of "intentionally boring" office furniture, a series of 50 chairs based on manga-style comic books and a range of splotchy metal stools.