Architect Phillip Lühl has added a pair of extensions to a Modernist house in Namibia, using cement brickwork textured with the coarse fibres of hessian fabric (+ slideshow).

Lühl, a lecturer at the Polytechnic of Namibia, wanted the new additions to stand in contrast with the original 1960s property, which features smooth white-rendered walls.

To achieve this, he chose to build the structures using what he calls "bagged concrete bricks". These are cement blocks that, once built, are finished with a layer of cement. This is applied using a hessian bag.

"Bagged concrete bricks are essentially cement bricks, which are the most common brick types in Namibia," explained the architect, who studied in the Netherlands before moving to Africa. 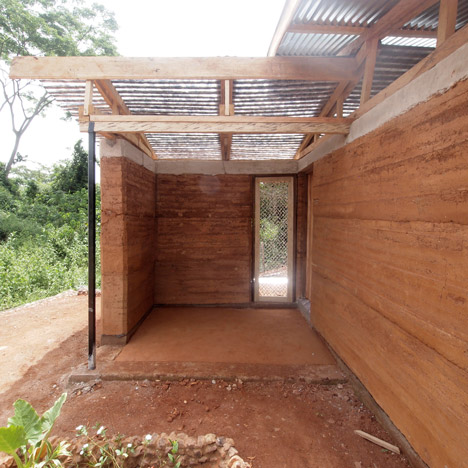 "They are not plastered, but finished with a cement slurry that is applied with a hessian bag," he told Dezeen. "This allows the brick course to remain exposed and allows the walls to be painted if required."

Located in Windhoek, the original two-storey property was designed in 1968 by architects office Stauch and Partners as a house and studio for an artist.

Studio founder Hellmut Stauch had trained at the Bauhaus, so the house bears many hallmarks of Modernist architecture, including concrete columns, slender-framed windows and an expansive balcony.

Over four decades later, the house was occupied by the artist's granddaughter, her family and a lodger. Space had become a commodity – the original ground-floor studio was being used as a bedroom, the garage was now the studio and the children were sharing a room.

Lühl was tasked with creating additional bedrooms and living spaces, without compromising the original building. His response was to create two small extensions rather than one large one, both designed to match the house's proportions.

"Expanding a Modernist pavilion that was in near-original shape became the main challenge of the design," said Lühl. "The choice of self-contained structures that hardly touch the old building and speak a formal language of their own was a conscious one."

The smallest of the two extensions is located to the northwest. It contains an extra children's bedroom, as well as a new bedroom for the lodger, connected to a space on the ground floor that now serves as a living room.

The second extension provides a new en-suite guest room, a replacement garage and a home studio. A staircase extends up alongside it, leading up to a terrace created on a section of the roof.

The architect calls the project Backpack for Modernist Lady.

"The old lady now wears two backpacks, proudly, and can carry more stuff than ever before," he added.

Photography is by Christine Skowski.