Seymourpowell designed the First Spaces interior for the Airbus A380 after finding that passengers were willing to pay more for first-class cabin seats as they offered privacy and personal space.

The London firm identified three key elements that an ideal first-class cabin would offer: hotel-like accommodation, integration of new technologies, and an expression of "contemporary luxury".

Applying these criteria to the first-class section of a standard Airbus A380 would create "the boutique hotel of the skies", said the designers.

"We've long been considering ways to create aircraft interiors that can adapt more to suit the needs of passengers and add flexibility to the business models of airlines," said Jeremy White, head of transport at Seymourpowell.

"Lead times for new aircraft and their expected service life are so long that we've had to think well beyond fashion and style trends and instead understand how new technologies might enable change, and how passengers' future needs and expectations will evolve," added founder Dick Powell. 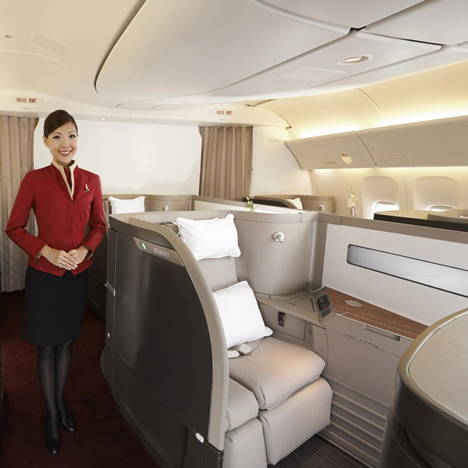 In Seymourpowell's first-class cabin design, travellers would be able chose from four single rooms or two double rooms – both of which would offer completely private accommodation.

As well a proper bed, each room would include storage space for luggage, a hanging space and drawers for clothes, a large table that deploys from the window side, and a tablet to control all room functions.

Seymourpowell has also envisioned a service system that could anticipate the needs of the passenger before they are even voiced.

The Smart Inflight Service System (SISS) would gather information from sensors in the room, and combine this with data about each passenger's preferences to figure out their potential needs throughout the flight and feed them back to the cabin crew.

The tablet in each room would allow passengers to make adjustments to their seat positioning and the room's lighting, while browsing the internet and ordering food from the menu.

In the lobby, horizontally slatted walls would curve in an S shape to create spaces for the passenger rooms.

A set of glazed doors at the rear of the cabin would allow passengers a glimpse of the food preparation area, inspired by contemporary restaurants with visible kitchens.

A pared-back colour palette has been used throughout the design, but soft furnishings could be changed to suit each passenger's preferences.

The interiors of the first-class cabins for Dutch airline KLM are designed by Hella Jongerius, and the most expensive seats on Hong Kong-based Cathay Pacific's planes are by Foster + Partners.

Other recent developments in design for air travel include plans for a new commercial aircraft that would carry as many passengers as a jumbo jet but produce significantly less emissions, and a hybrid car and plane that could be used both on roads and in the skies.