Milan 2016: designers Kram/Weisshaar have created a razor-thin table embedded with hidden circuitry so you can cook dinner and keep plates warm and drinks cold while you dine.

Induction rings in each SmartSlab table allow the ceramic top to act as a hob for cooking, while plate-sized heating elements ensure served food stays at an optimum temperature.

"It's really simple and it keeps the food hot," said Clemens Weisshaar of the Swedish/German design studio. "You need 42.5 degrees Celsius, not more not less. You can put your hand on it and it won't burn you."

Heat-transferring Peltier devices turn other parts of the tabletop into drinks coolers. "With the cooling you need minus five degrees Celsius to keep a glass of water or a bottle of sparkling wine cool," Weisshaar added. "It's quite simple."

This movie demonstrates the functionality of the SmartSlab table, with touch-sensitive controls embedded underneath the surface

The tables feature tops made of SapienStone – an advanced, architectural-scale ceramic tile measuring three metres by 1.5 metres, but which is just six millimetres thick.

The tables, exhibited at Atelier Clerici in Milan this week, were developed in collaboration with Iris Ceramica Group, which manufactures the tiles.

The project began when the manufacturer asked Kram/Weisshaar to explore potential new uses for their enormous tiles, which are made on state-of-the-art production lines in Modena, Italy, and which are sold as architectural surfacing materials.

The result is SapienStone SmartSlab – a composite surfacing material that has the potential to end the traditional separation between construction materials and electrics in buildings.

Besides heating and cooling elements, the circuitry can be customised to include devices such as wireless charging modules, touch-control panels and even Wi-Fi base stations.

"When they approached us to think about what could be done with a tile, it was very obvious that we could put a lot of the architectural features that are still done by craftsmen in the tile," Weisshaar said. "Somebody drills a hole for every plug and every light switch, which costs a lot of money."

By embedding circuitry in the floor or wall tiles, electrics could be installed in the factory and slotted together on site.

"We basically treat the tile as a circuit board and attach circuits to the back so they can all be installed in the factory," said Weisshaar.

The SmartSlab tables have been developed to test the concept as a furniture product rather than an architectural product.

Kram/Weisshaar worked with leading chef Massimo Bottura, who runs the three-Michelin-starred Osteria Francescana restaurant in Modena, to use the tiles to reinvent the kitchen. 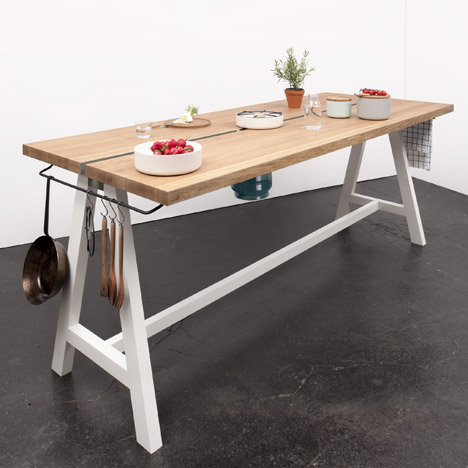 The resulting tables could allow food to be prepared, cooked and eaten in the same place, with the chef sitting with his guests and cooking in front of them rather than preparing and serving food in separate areas.

"Massimo loved the idea that you could just work on the surface for the preparation, the cooking, and potentially the eating of the food on one surface," said Weisshaar, adding that a single-surface kitchen would make clearing up a lot easier, since the tile can simply be wiped down.

"It takes ages to clean a kitchen, especially a professional kitchen as they have all these massive stainless steel modules," he said.

The designers are now collaborating with Iris Ceramica Group to investigate how customers could order and configure their customised single-surface kitchens online.

Kram/Weisshaar's Reed Kram said that while attitudes to food had changed radically in recent years, there had been very little innovation in kitchen design.

"There's this incredible work being done by chefs around the world, but little design work around rethinking in a more radical way how we cook and eat," said Kram. "This is just the first investigation."

Weisshaar added that kitchen design had hardly moved on since the seminal Frankfurt kitchen. Designed in 1926 by architect Margarete Schütte-Lihotzky, this pioneered the idea of kitchens made from modular units and led directly to the development of the "fitted" kitchen.

"Most people essentially still buy Frankfurt kitchens," said Weisshaar. "Then there's the posh kitchens which are monolithic and are just demonstrations of purchasing power, mostly for people who don't cook. In the 70s and 80s there were a couple of attempts on the kitchen such as Joe Colombo turning the kitchen into a mobile trolley that can be brought anywhere but in the last two decades there hasn't been any attempts made to rethink the kitchen."

"The industry still makes 60 by 60 by 90 centimetre volumes from which you built a kitchen," he added. "But we're thinking it could be much more of a sheet rather than a volume, and the table demonstrates that."

Kram/Weisshaar works at the intersection between design and technology. Projects by the duo include Robochop, which allows smartphone users to remotely instruct a robotic arm to cut up a block of styrofoam, and Picó Blitz, a sound system clad in flexible mirrors that distort dancers' reflections in time with the music.