The duo wanted to create a building with an interior protected from the harsh Mediterranean sun but still intimately connected to the outside, allowing residents to enjoy the warm southern climate.

The result is a simple rectilinear volume with white load-bearing external walls – typical of the traditional local vernacular – but perforated with openings in a range of shapes and sizes.

The apertures are surrounded by deep concrete frames that offer shade from direct sunlight. They are painted blue inside, in reference to the window frames of the farm building that occupied the site previously.

The smallest windows appear random in their arrangement, but are intended to relate to the internal layout. In some places they frame specific views over the countryside, while in others they line up with an window opposite to allow for cross-ventilation.

"The openings in the facade appear laid out on a disordered pattern when observed from the exterior, but they are actually looking for the internal adjustment," said Torres Roa and Caballero in a statement. 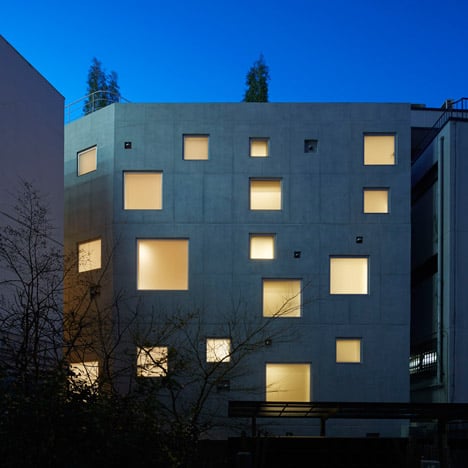 The largest of the voids runs through the entire building, creating a living room with dual-aspect sliding doors, which can be left open to the elements during the summer.

"The double-orientation living room is the house's central area but the boundaries extend beyond the enclosure, integrating the entrance courtyard and the rear terrace," said the architects.

"It becomes an interior or exterior space depending on the time of year, bringing all the surrounding nature closer to the house occupants during warm seasons," they continued.

A double-sided fireplace connects the living room to the kitchen on one side of the ground floor, while the other side contains a corridor connecting the bedrooms.

The interior is contemporary but features some traditional details that reference the local culture, including stained-wood window frames and the rustic tiled floors.

The crisp white walls allow the full effect of the painted openings to be seen as they cast a blue glow into the rooms.

At the end of the hall, the building is pinched to separate the guest room from the rest of the house, as well as to create a sunken courtyard that draws light down into an additional social space on the basement floor below.

The designers have also remodelled the surrounding site, extending and refurbishing the existing stone walls to create terraces with seating areas and a swimming pool.

The pool is the same colour as the ponds that are dotted around the island to further relate the project to the natural landscape.

Other proposals that incorporate irregular windows include a photographer's house by Alireza Razavi which is dappled with windows to illuminate the interior in different ways throughout the day, and a concrete building in Tokyo which is faceted and punctured to incorporate the different functions contained within.