A replica of the Palmyra Arch – a 2,000-year-old Syrian architectural landmark believed to have been destroyed by Islamic militant group ISIS – has been erected in London's Trafalgar Square.

The 15-feet-high (4.6-metre-high) replica was officially unveiled by mayor Boris Johnson on Tuesday afternoon, and will be on display in the UK capital for three days.

It will then go on show in public spaces around the world including Dubai and New York, before it is expected to take up a permanent spot in Palmyra near to the location of the original arch.

Experts from Oxford and Harvard universities worked on the project with the Institute for Digital Archaeology (IDA) after the original monument was reportedly blown up by ISIS in October last year.

The IDA – based in Oxford, England, and Cambridge, Massachusetts – then recreated the structure from marble using a large 3D printer and photographs of the original.

Roger Michel, executive director of the IDA told the BBC that he wanted London to be the first to house the replica because the city itself had been reconstructed after the second world war, and that he hoped "anybody who appreciates free speech" would understand why recreating the arch is so important. 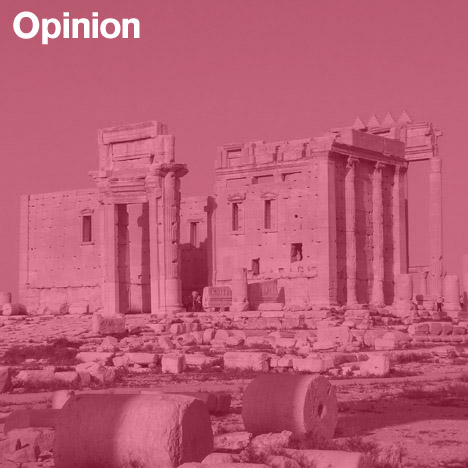 "It doesn't mean because you mourn the loss of life that you should leave your country in ruins," he said. "No-one can bring back the dead, but you can improve the lives of the living."

He added: "This is about censorship, in my opinion. If there are folks in the world who want to delete things from the historical record, they need to be restored. It's as simple as that."

Located northeast of Damascus, the Palmyra Arch was an entryway to the Temple of Bel – an ancient Syrian archeological complex.

"Palmyra was one of the most important cultural centres of the ancient world," said heritage group UNESCO. "From the first to the second century, the art and architecture of Palmyra, standing at the crossroads of several civilisations, married Graeco-Roman techniques with local traditions."

It is unknown whether the Palmyra Arch was fully destroyed, something that Alexy Karenowska – the institute's director of technology – said was part of the motivation behind the installation.

"Given the level of destruction in Palmyra, it seems unlikely it has survived without some damage, but if it remains standing in any form, it represents an outstanding symbol of resilience," she said. "If it doesn't, then the message is obviously just as powerful, but for different reasons."

ISIS is a group that follows a fundamentalist doctrine of Sunni Islam. The acronym stands for the Islamic State of Iraq and Syria, but the group is also referred to as ISIL, and the Islamic State.

The militants have led a recent campaign to capture large parts of the region, destroying many of the region's cultural landmarks in the process – including the site of Palmyra.

In a column for Dezeen, architect Sam Jacob described the destruction of Palmyra's ruins as "an assault on the very idea of civilisation".

"The destruction of the ancient city of Palmyra is a crime, a terrible crime against us all, an assault on human culture, on the very idea of civilisation," he said. "These are attempts to wipe the evidence of human culture off the surface of the planet, a kind of retroactive genocide. It seems to be a tactical annihilation of history itself in order to rewrite the present."

Maamoun Abdulkarim, Syria's director of antiquities, was in London to watch the installation of the replica arch. Abdulkarim also told the BBC that by recreating the monument, awareness of Syrian heritage is being raised.

"It is a message of raising awareness in the world," he said. "We have common heritage. Our heritage is universal – it is not just for Syrian people."