Dutch design studio PolyLester has created a collection of furniture on wheels that is used to transform an industrial hangar into a venue for exhibitions, workshops, dinners or parties (+ slideshow).

Amsterdam-based PolyLester designed various mobile elements to furnish the old hangar, which was first built to house military engineering facilities at one of the 42 forts along the Dutch capital's historic defence line.

Named The Moveables, these elements – ranging from tables and seating areas to small rooms and cupboards – can be wheeled into an endless variety of configurations.

Because of this, they can accommodate all sorts of different activities.

"The Moveables invites its proprietors and users to become creatively interactive with the space," explained designers Gabriel Lester and Martine Vledder. 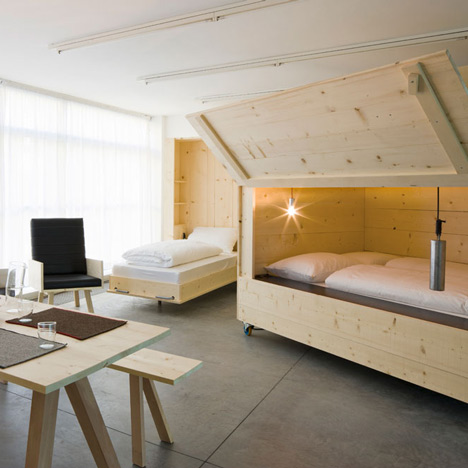 "By introducing archetypical exhibition elements of white pedestals set in wheels, rather than transforming the historical hangar into a white cube, The Moveables proposes a lighthearted tongue-in-cheek reference to so many bland and unremarkable contemporary art and exhibition centres around the world."

The project was commissioned by Kunstfort Vijfhuizen, an established art centre at Fort Vijfhuizen. The remodelled hangar provides the centre with an opportunity to expand its programme.

To create as much flexibility as possible, many of the mobile elements combine different functions. For instance, the reception desk has an integrated chair, but also includes shelves for displaying books or leaflets.

Two staircase-like units provide bleacher-style seating, but also have wardrobe storage built in, while a bookshelf unit doubles up as a partition or projection screen.

"Suggestive of playful construction games, jigsaw puzzles and computer games such as Tetris, the individual elements can be either grouped together to form new volumes, or can be placed separately within the space, to create a number of functional islands," added the designers.

All elements are predominantly white, contrasting with the grey tones of the cobbled floor and metal structure. But the designers have also picked out some details in bright yellow.

"The yellow details suggest rays of light cast onto the volumes," said Lester and Vledder. "It is as if all of a sudden, within the obscure interior of the hangar, an array of light has been captured."

Lighting is provided by six industrial pendant lamps suspended overhead. A motorised system allows the position of these lights to be adjusted to suit different layouts.

"Brand new equipment has been rolled into the old hanger, waiting to be discovered, played with and utilised," added the pair.

The Stelling van Amsterdam – also known as the Defence Line of Amsterdam – is a 135-kilometre ring around the city consisting of 42 historic forts.

It was designated as a UNESCO World Heritage Site in 1996, prompting a number of visitor attractions to be constructed. As well as the Kunstfort Vijfhuizen, examples include a spiral-shaped building at Fort Diemerdam by Emma Architecten.

Lester and Vledder founded their design studio 2013. Past projects include a three-dimensional bamboo lattice built over a harbour railway viaduct in Kent, England.

Photography is by Ossip, unless otherwise stated.