The eyewear series – called Collection 1 – was developed by the Berlin-based studio as an example of how to manage the lifecycle of fashion products, particularly after they go out of style or are discarded.

The glasses are made from a plant-based plastic that will biodegrade when disposed of, but is still strong enough for day-to-day use.

Founded by product designer Vlasta Kubušová and fashion designer Verena Michels, who met while studying at the University of the Arts Berlin, Creating Plastics aims to replace everyday plastic fashion and lifestyle objects with biodegradable versions.

The sunglasses are one of their first product ranges, and 10 prototypes were exhibited at Gallery Rossana Orlandi during this year's Milan design week.

All 10 feature frames made from different varieties of bioplastic, although the designers say that the plastic technology has not developed far enough to be able to create lenses yet.

"Our pursuit is to be in full control of the lifespan of the product, from its origin – in the form of unrefined material – through to the final product until its inevitable decay," said Crafting Plastics.

The base of the material used for the sunglasses is polylactic acid – a form of polyester plastic that can be moulded when heated, which can be produced from different plant-based substances, such as corn starch, tapioca or sugar cane.

The studio worked with scientists to develop a process that involves adding biodegradable polymers to produce different effects as the plastic cools. This process is currently awaiting a patent.

"The base of our material is a common biopolymer polylactic acid (PLA), which can be produced from from different substrates, like corn starch, sugar beet, etc," Crafting Plastics told Dezeen.

"We prefer to simply talk about renewable resources, as the specific source is a variable that is still in development."

"We work in direct collaboration with researchers who develop the material so that we can play with it, test different mixes and their specific properties, technologies, colours," added studio co-founder Vlasta Kubušová. "We basically start designing in the lab." 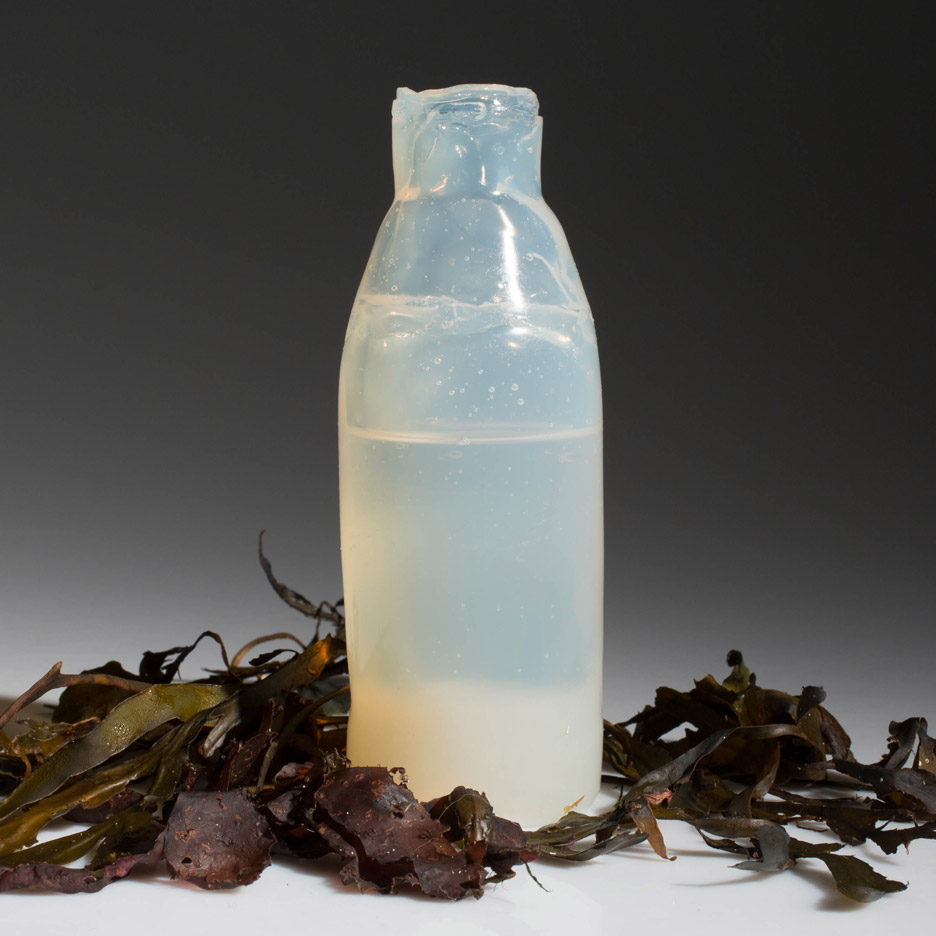 The plastic is hardened by artificially speeding up its cooling process, in a process called glass transition. As the material solidifies, the formation of crystals causes varying levels of translucency and bubbling textures.

To create the 10 prototype sunglasses, the studio produced 10 different plastic swatches and then laser cut the frames from each piece individually.

Colour was added to some of the tests using biodegradable pigments and natural food colouring, resulting in either sharp accents or a marbled effect.

Some of the sunglasses feature strips of blue and yellow, while another has crystals circling the lenses. One pair is formed from two different plastic samples so that the frame is different to the rim.

"The specific properties of our bioplastic make it decomposable, and therefore ecological, but still durable enough to replace synthetic plastics in many instances," said Kubušová.

"We believe that perishableness makes our glasses not only more ecological, but more valuable as well – hence the main slogan: these won't outlive you," added the designer.

A number of designers are investigating alternatives to traditional plastics as concerns grow over the material's impact on the environment. Experiments with bioplastic include Ari Jónsson's biodegradable bottle that combines red algae powder with water and Peter Marigold's mouldable card that can be used to repair broken objects.

Crafting Plastics exhibited the eyewear collection at Spazio Rossana Orlandi during Milan design week, which ran from 12 to 17 April 2016.

Lifestyle photography is by Anna Smoroňová.