Anders Berensson Architects has unveiled conceptual plans for Stockholm's tallest building – a 133-metre wooden skyscraper covered in numbers, which would be erected on top of a 1960s car park in the city centre.

The local studio was commissioned to design the 40-storey skyscraper by Stockholm's liberal Center Party, to help cater for the city's rapidly growing population.

Berensson previously drew up plans for a high-density housing scheme with aerial walkways for the political party with the same idea in mind.

"If we want to reduce the amount of cars in the city centre of Stockholm and at the same time make space for more housing without building on green areas, then replacing car parks with housing, shops and restaurants feels obvious," said the architect.

Berensson proposes that the 40-storey structure could be made from cross-laminated timber (CLT), a type of engineered wood made from sections of laminated wood. The material is considerably stronger and more stable than regular timber, allowing architects to propose bigger and taller wooden structures than ever before.

"Today in Sweden CLT is a rather new technique and is mostly used for low buildings but we wanted to show its potential especially since Sweden has a big wood industry."

The slender skyscraper named Trätoppen – Swedish for treetop – is designed to stand on top of the Parkaden car park, designed by Swedish architect Hans Asplund in the 1960s.

The car park has a distinctive number-covered facade that helps drivers orient themselves within the building – a feature that Berensson intends to continue onto the facades of the skyscraper.

"From the outside, one can count the floors by reading the facade and from the inside you will be reminded what floor you are on just like in the parking garage," said Berensson.

"This is a useful feature given that the skyscraper will be the highest in the city centre of Stockholm," he added. "The facade also has some practical benefits and acts like a sun screen, which keeps the building cool and energy efficient." 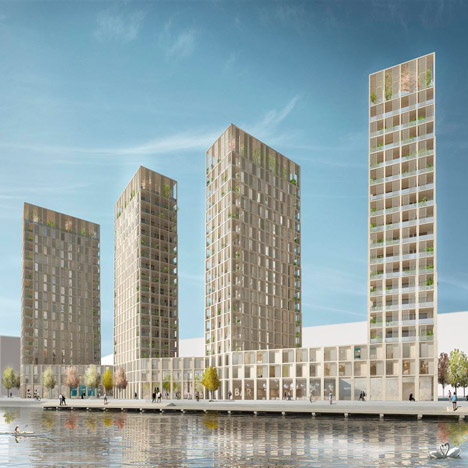 The first seven floors, inside the existing car park, would be converted into shops and restaurants, with a public terrace wrapped around the base of the skyscraper on its uppermost level.

Levels eight to 39 would host 250 apartments behind the perforated timber screen, and a further terrace would be located on the 40th floor.

While there are no immediate plans to realise the project, Berensson has his fingers crossed for the next election, when the Center Party may be voted into government.

"Most parties in Stockholm agree that there need to be more residential buildings in Stockholm. So my guess would be it's a big chance that it will be built in a lower version in a 10-year period from now," he told Dezeen.

Trätoppen is the latest in series of recent timber skyscraper proposals, which are becoming a more realistic prospect thanks to the advent of cross-laminated timber.

Recent examples include an apartment tower proposed for the Barbican estate in London and a plant-covered housing and office complex for Bordeaux. A row of high-rise apartment blocks has also been proposed for Stockholm by Tham & Videgård Arkitekter.