Arched openings in the sandstone facade of this Dubai mosque by Ibda Design lead worshippers into a bright marble courtyard with a textured minaret (+ slideshow).

The architects used Saudi sandstone for the outer walls of the mosque, which is located in the famously sandy United Arab Emirates city. The aim was for the building to look like an extension of the desert environment.

The ochre-toned walls offer contrast to the building's bright white dome and marble-lined interior, which is intended to provide a retreat from the "harsh elements of the material world".

"Al Warqa'a Mosque echoes the spatial simplicity of Prophet Muhammad's seventh-century house in Medina, which is considered the first mosque in history," said the studio.

"The design approach behind this layout was influenced by an understanding of the mosque as a multifunctional space for the community to congregate and socialise in after prayer; in this way it is seen as an extension of its immediate environment." 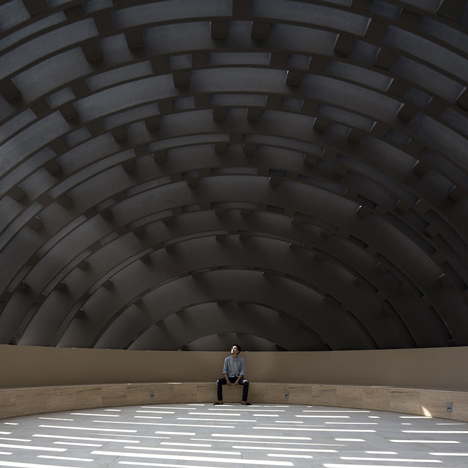 The courtyard links with the main hall and is used as an overspill area during Friday prayers, or peak times during Ramadan and Eid.

A row of trees and a minaret rise from the open-air space, which is also intended as a place to socialise.

The minaret is decorated with an mosaic-like pattern, similar to the one Henning Larsen Architects plans to use for the facade of its mosque in Copenhagen.

Worshippers enter the hall through a further set of arched openings and glass doors, while wooden doors open onto the street, or into a corridor leading to washrooms and dining areas.

These multiple entry points are intended to encourage a fluid use of the building.

"This increased accessibility creates an oasis-like effect that emphasises the notion of the mosque as a communal space," said the studio.

"Defining access into the haram [holy space] through the sahn [courtyard] is designed to create a spatial shift that gradually takes worshippers from the busy street environment to the serene space of worship through a series of playful and inviting arches."

A separate entrance for women is located in one of the building's four corners and leads directly to a separate mezzanine prayer room above the main hall.

Here, small peek-holes in the patterned balustrade – which matches the minaret – give a view of the hall below.

Skylights surround the perimeter of the room, flooding both the upper and lower spaces with natural light.

"Light also plays another role," explained the architects. "It serves to call attention to the movement of the sun as a catalyst in the changing prayer times, the constant motion becoming a visual reflection of their daily cycle."

Like the Al Warqa'a Mosque, it has been envisaged as a retreat from the hubbub of the city and the complex will form a part of.