Bands of shutters featuring a geometric perforated pattern appear to form seamless surfaces that extend across the facade of this house in Tel Aviv by Israeli architect Pitsou Kedem (+ slideshow).

The house is located in an area to the north of the city where a few streets lined with one- or two-storey homes were built during the city's expansion in the 1950s.

Pitsou Kedem designed the property to complement the aesthetic style of the neighbouring buildings and to make the most of the small site, which was previously occupied by another property that was demolished.

The building's additional storey sets it apart from its lower neighbours, while its clean lines and bright white-painted walls lend it a contemporary appearance.

From the side, a gabled profile references the shape of the original structure and the history of the neighbourhood.

"We tried to achieve an urban, minimalist and pure design which produces bright spaces that allow for a relatively small plot of space," Kedem told Dezeen. 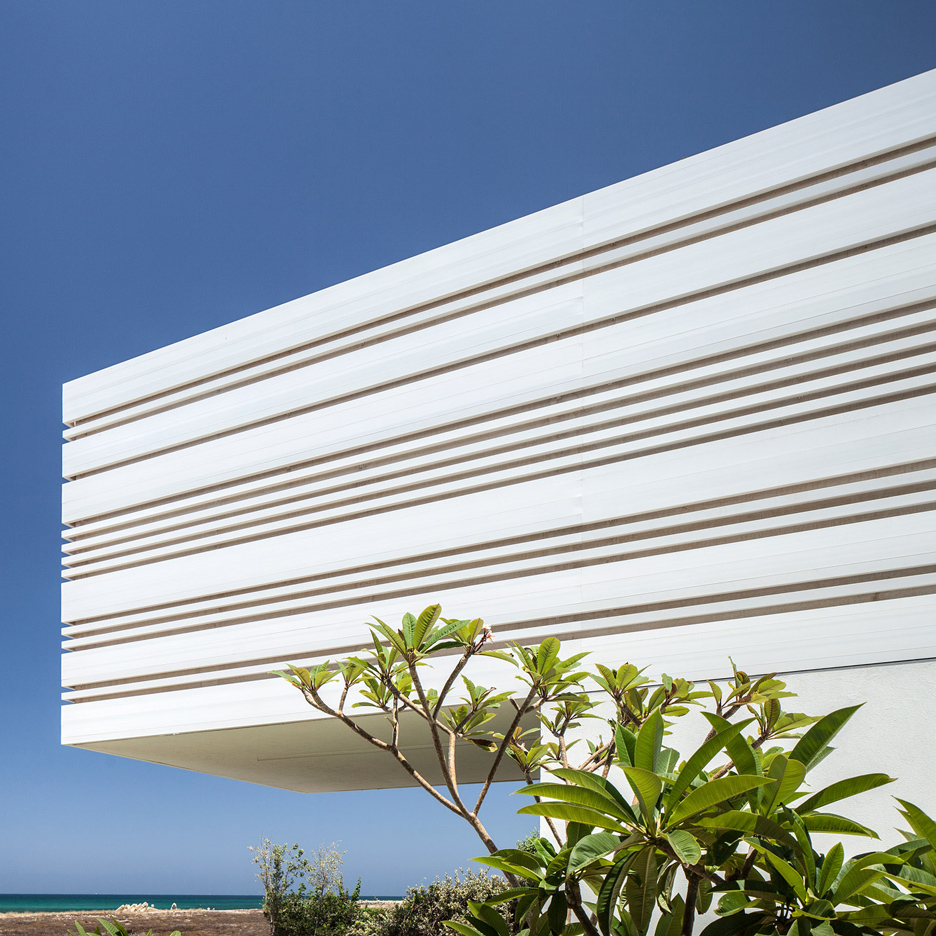 The street-facing elevation incorporates windows that divide the surface into horizontal bands. The windows are covered with iron screens punctuated by a continuous pattern of rectangular apertures. These ensure privacy without blocking out daylight.

"The idea behind the pattern was to produce a shape that allows many blinds to be connected in a long rows without the joints being detected," Kedem explained.

"As this skin is all one unit, we've been looking for a skin that allows enough visibility and still allows privacy."

The screens also evoke similar patterned lattice work that is a feature of many Modernist homes built throughout the city.

Kedem is fan of this architectural movement and has referenced it in several previous projects, including a beachfront house with a cantilevered upper storey and a Modernist-inspired concrete and glass home.

A path extends from the street to the entrance and straight through the main living room, kitchen and dining area towards the garden and poolside patio beyond.

The interior is designed to emphasise its connection with this rear garden, which form part of the living space when the large sliding glass doors are opened.

"What makes this house unique is that, despite a location within the city and surrounded by tall buildings, the site allows for a private house with a courtyard that is the added value," Kedem claimed.

The open-plan living area incorporates a void that unites the building's two levels. A staircase at one end of the room ascends to a bridge lined with a glass balustrade, which traverses the room and connects the bedrooms on the first floor.

The vitrine-like quality of the glazed rear wall allows plenty of light to enter the interior. The sense of brightness is enhanced by the white walls and reflective surfaces, including polished stone tiles.

The shutters at the front of the house cast dappled light across the interior surfaces. When the windows behind are opened, the screens also allow breezes to naturally ventilate the house.