Golden boxes fronted by balconies make up the exterior of this student housing block in Paris by Hamonic+Masson & Associés, which also features a secret garden and nesting areas for birds (+ slideshow).

Located in Boulogne-Billancourt, in the western suburbs of Paris, the Golden Cube housing was designed by Hamonic+Masson to accommodate 156 student flats with parking.

To maximise the use of space, the architects arranged the 18.2-square-metre flats side by side on each floor of the eight-storey building. They then added 1.5-metre-deep loggias along the facades to create private terraces for each resident.

Each balcony is flanked by perforated golden aluminium, allowing light to permeate the rooms but affording each resident a degree of privacy. Combined with the golden-painted walls, these surfaces gives the building a distinct identity.

"The idea of the perforated metal was to create a moiré effect filter that blurs the building's contours," studio founders Gaëlle Hamonic and Jean-Christophe Masson told Dezeen. "This creates a vibrant building that is always changing depending on the perspective and the time of day."

The balconies are mainly located along the two long facades, although some are also positioned on the side walls. They are slightly offset from one another, with some are longer than others, as if they are extruded from the inside. 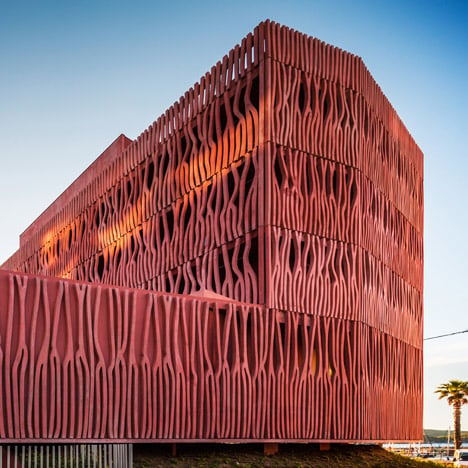 Bedrooms and study desks are located just behind the loggias, with bathrooms tucked away behind.

"Like birds, students come and go, and need their nest," said Hamonic and Masson. "This is why it was important to offer the maximum space possible in an extremely dense setting."

"Offering students an outside area invites different usages and creates variation within the dense collective so that the balcony becomes and extension of the home, and life starts to take place," they said.

The Golden Cube housing forms part of the larger redevelopment of Boulogne-Billancourt, which was an industrial centre before the departure of car manufacturer Renault. Antonini Darmon recently completed a social housing block in the area, which was based on the design of the Renault car factories.

The eight-storey student housing is situated in lot A4 Est in Le Trapèze, a sector allocated for housing, offices, retail, public facilities and green space.

To introduce biodiversity, the architects worked with ecologists to designs bird boxes that slot in between the concrete structure and the golden cladding. The occupants cannot interfere with them, and they require no maintenance.

A garden was also introduced below ground level, just beneath the entrance. It is overlooked by some of the flats and a communal dining area on the first floor.

Hamonic+Masson & Associés was founded by Gaëlle Hamonic and Jean-Christophe Masson in 1997. Last year the studio completed Paris' tallest housing block after 40 years due to skyscraper restrictions.

Other recent examples of housing projects in Paris include a block of student accomodation modelled on a stack of wooden baskets by OFIS Arhitekti while ECDM added a curving glass and steel apartment block to a row of housing blocks.

Photography is by Sergio Grazia unless stated otherwise.